Meghan Markle and Prince Harry made their highly-anticipated joint appearance at the One Young World summit in Manchester on Monday evening.

All eyes were on the Duchess as she gave the keynote speech at the opening ceremony, in which she spoke of the importance of ‘belonging’.

Former actress Meghan told the 2,000 delegates how her life had changed when she last joined the summit in London in 2019 – singling out her role as a wife and a mother – but making no mention of becoming a senior royal the year before.

MORE: Who are Prince William’s most trusted friends?

“I joined you in London in 2019. And by that point, it’s fair to say, my life had changed rather significantly. I was now married, and I was now a mom,” she said, leaving a pause at the end, which was filled with cheers from the audience. 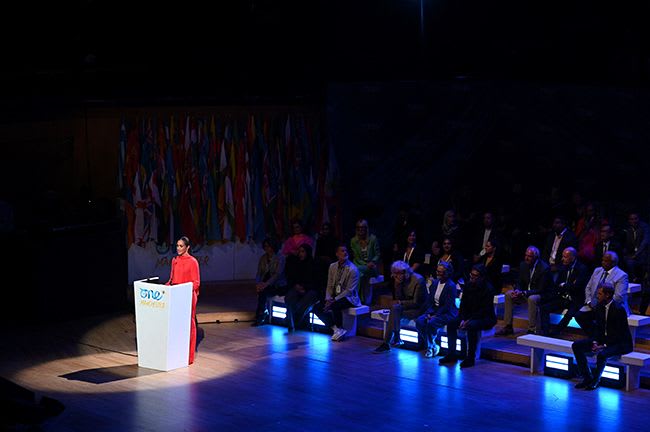 Meghan delivered the keynote speech at the summit

“My world view had expanded exponentially, seeing the global community through the eyes of my child,” she added, speaking about her son Archie.

Her husband proudly watched from the front seat, from where the couple watched proceedings. Meghan, with her hair in a ponytail, was seen swayed in time to the music, which included Dancing In The Streets and Respect, as she clapped her hands.

Harry and Meghan sat side by side in the front row

Harry, meanwhile, leaned over to whisper in his smiling wife’s ear a number of times.

Their arrival at The Bridgewater Hall for the start of the ceremony was met with great fanfare, with the couple making their way through the auditorium to huge cheers as delegates held up their phones to film them.

However, their arrival in Manchester earlier that day was decidedly more low-key.

Harry and Meghan stunned onlookers as they were seen arriving at London Euston Station – having driven the 27 miles from their home, Frogmore Cottage in Windsor in a hybrid electric Range River.

They then caught an Avanti West Coast train to Manchester, accompanied by two bodyguards, which arrived shortly after 2:30pm.

The couple were in high spirits

It comes after the pair chose to travel on a commercial flight to the UK from their home in Montecito, shunning the use of a private jet.

The couple have previously come under fire for their use of private planes – although the Duke has previously defended the use of private jets for security reasons, saying in 2019 that “99 per cent” of his flights are commercial.

Harry and Meghan will travel to Dusseldorf, Germany on Tuesday to mark the one-year countdown to the 2023 Invictus Games in the city.