The first three episodes of Meghan Markle and Prince Harry’s docuseries are currently available to watch on Netflix, so please run don’t walk for a ton of content—much of which covers their extremely sweet love story.

On top of providing a huge amount of unseen footage and photos from the early days of their relationship, the couple served up some previously unknown details about how they met.

“Meghan and I met over Instagram. I was scrolling through my feed and someone who was a fried had a video of the two of them, like a Snapchat,” Harry explained. “With dog ears. That was the first thing. I was like, who is that?”

Apparently, their mutual friend immediately reached out to Meghan, writing THIS email:

Meghan checked out Harry’s Instagram at this point (yes, he had a secret Insta) and liked the nature pic vibes, so they got in touch and met in London while Meghan was there for Wimbledon. Psst: here’s a pic of Harry’s Insta:

And yep, they released some of their texts. Ahem!

Apparently, Harry was late to the dinner which Meghan was very much not into, but as he put it, “I was panicking I was freaking out, I was like sweating.” And they ended up having a great time. “He was just so fun,” Meghan said. “Just so refreshingly fun, and that was the thing, we were like childlike together.”

Oh, and Meghan was the one who called him later than night to set up another hang, joking “I’m sure he told me it was so forward and American.” Here’s a pic from their date! 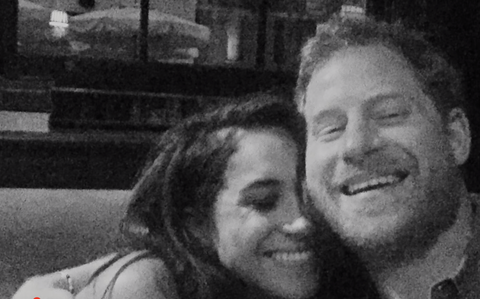 The rest? History! Like, history that is very much covered in Harry & Meghan, so again GO WATCH!

Fashion Tips I learnt from my mom