Megan Thee Stallion took to Instagram to share wild and sexy pics with her beau Pardi Fontaine as they celebrated ‘one year of fun’ together.

Megan Thee Stallion, 26, is feeling grateful for her relationship! The rapper shared new pics of her and her boyfriend Pardi Fontaine, 31, flaunting PDA while celebrating their one-year anniversary and they were truly eye-catching. One showed a shirtless Pardi drinking from the straw of a cocktail that was placed in the middle of his girlfriend’s behind as she strutted her stuff in a thong bikini.

Another showed the smitten musician hugging the hunk’s legs while another showed them posing in a mirror as she rocked bright pink hair. The incredible pics didn’t stop there either! A fourth had them standing in what appeared to be a bathroom as she held up her phone and he held onto her behind and others showed them getting sexy in the ocean, outside near a private jet, and more.

“1year of fun with you 🧡,” Megan wrote alongside her anniversary post, which received a lot of comments. “The cutest celebrity couple, hands down,” one fan wrote while another exclaimed, “So happy for you!” A third asked, “It’s been a year already?” and a fourth called them their “favorite couple.” 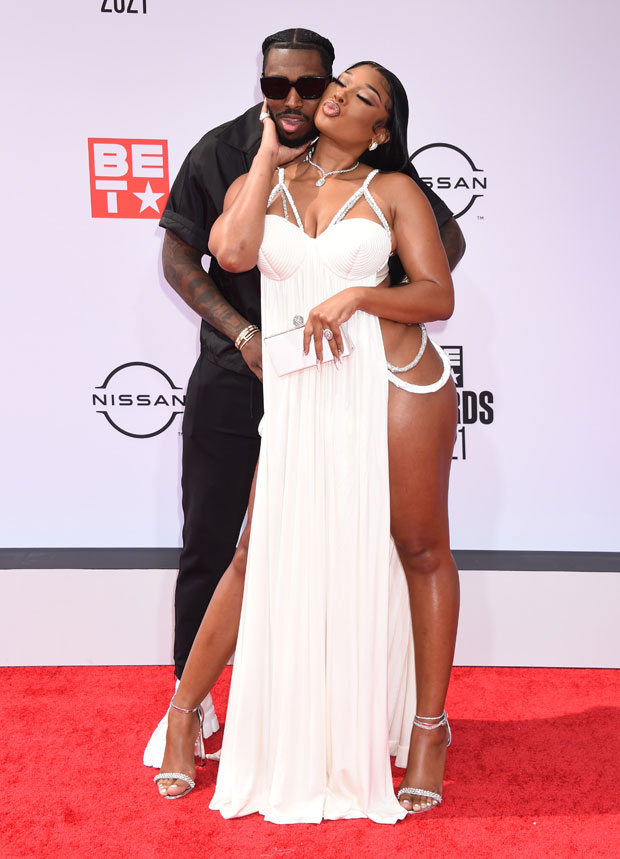 Megan and Pardi’s latest pics come after a year of putting their love on display. In Apr., they made headlines for kissing each other in an Instagram video that helped Megan show off her toned figure in a multi-colored bikini. Pardi was shirtless, showing off his tattoos, and they both looked so in love!

The lovebirds have also been spotted attending various events together, including a Grammys after party in Mar. Just a month before, Megan confirmed their romance when she referred to Pardi as her “boo” during an Instagram live session. He also shared a Valentine’s Day post that let her fans know he showered her with gorgeous flowers for the holiday and took her on a private plane to a restaurant to enjoy a romantic dinner.