Good morning, are you in the mood for some casual engagement speculation with your gallons of coffee? Us Weekly is out here reporting that Megan Fox wore what very much appeared to be an engagement ring to Machine Gun Kelly’s 2021 MTV Video Music Awards rehearsal on Wednesday, September 8.

Tragically there are no pics, but an Us Weekly source says that Megan was seen watching Kelly prep while wearing a “ring on that special finger.” On top of that, the source said there could be a “surprise announcement” during MGK’s set this coming Sunday, September 12—where he’s performing his new single “Papercuts” with Travis Barker.

Just to catch everyone up on Megan and MGK’s timeline, they met on set of their movie Midnight in the Switchgrass (which they later refused to promote, lol) in May 2020 and have been going strong ever since. And by “strong” I mean that they’re super in love and hooking up on random Airbnb tables:

Just FYI this isn’t the first time MGK and Megan have prompted engagement speculation. Back in January everyone thought Megan was wearing an engagement ring, but she went ahead and shut down speculation with this: 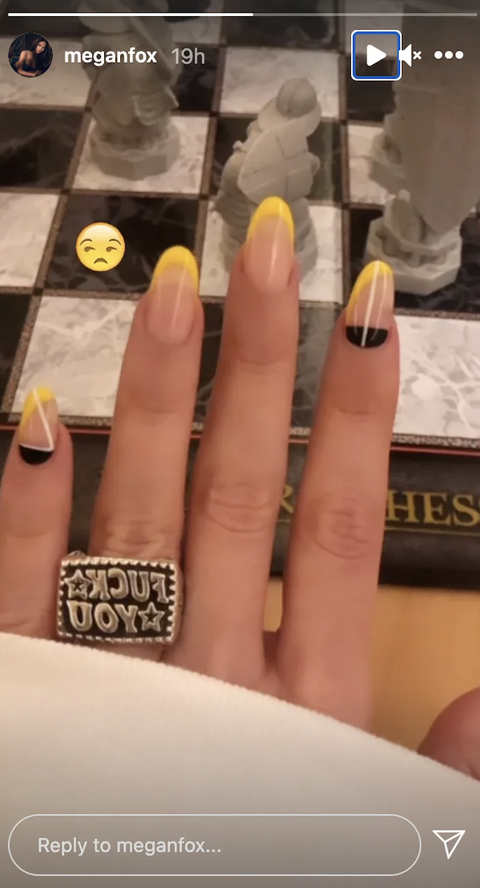 Meanwhile, a source told Us Weekly at the time that Megan “isn’t in any rush to get married again,” but that MGK would “marry her in a heartbeat.”

Guess we all better tune into the VMAs this weekend, huh?

Keanu Reeves Once Revealed What Makes Him Happy, and It’s the Purest Answer Ever

Kate Middleton Wears a Chic Gray Coat to Church with the Queen, as Prince George Goes on His First Grouse Shoot