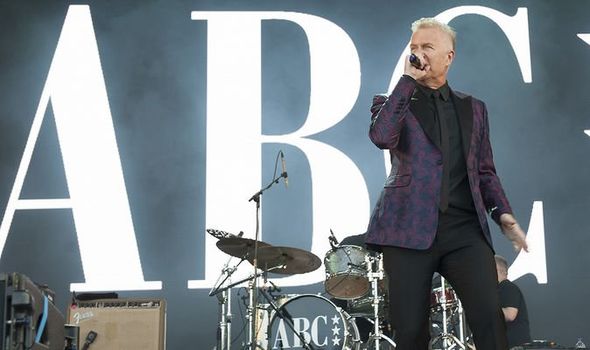 Today, with his band about to embark on a 40th anniversary tour for their chart-topping album The Lexicon Of Love, Martin and his gold lamé outfit will be front and centre again… with one slight hiccup: his costume will be a copy because Martin flushed his original suit, by Carnaby Street tailor ColinWild, down a hotel toilet.

Describing his frustration, Martin told The Daily Express: “I was at the Plaza Hotel in Tokyo. I’d performed 120 shows touring The Lexicon Of Love in that suit and I’d had enough. I was trying to cram my souvenirs of Japan into my suitcase, and the suit trousers wouldn’t fit.

“It wasn’t enough that I left them behind, I wanted to show to myself I was moving on. So I tried flushing them down the toilet, though they wouldn’t go down.”

Martin’s new gold lamé suit has been made by his friend, Savile Row tailor William Hunt. The star joked: “Obviously, the suit trousers are a little wider 40 years later.” And he reveals there were actually three original 1982 suits – but one got stolen that year after a concert in Coventry. Martin recalls: “I couldn’t believe the police couldn’t find it. I said to them, ‘Surely you can spot someone in a gold suit?’

“I’ve got one original suit left, which I’ll donate to the V&A Museum, or maybe auction at Sotheby’s as my pension fund.”

Martin’s relaxed mood about his 1980s fame is helped by realising how lucky he was to find success – and true love. ABC’s early hits were fuelled by heartbreak, but Martin has been happily married for 35 years to wife Julie, who helped the singer through his darkest period.

At the height of ABC’s fame in 1986, aged just 27, Martin was dHca diagnosed with the rare Hodgkin’s Lymphoma form of cancer.

“I soon learned to count my blessings,” he reveals.

“But, when I was diagnosed with cancer I thought, ‘Why me?’ I was on the international stage, my career going well, and it was suddenly taken away from me. Tina Turner had offered ABC to open for her on a world tour and I just couldn’t do it.”

Julie helped Martin through his treatment, and the couple got married as soon as he finished chemotherapy.

He smiles: “It was a really tough time, but Julie was incredible. I was on my knees, in a bad way. When somebody sees you at your worst like that and still loves you, that’s when you know it’s for life.”

Fortunately, the drive that had seen Martin rise from a working-class childhood in Stockport to Top Of The Pops returned as soon as the star recovered from cancer.

He admits: “Our honeymoon was only four days, so I could start work on ABC’s next album. That’s a bit pathetic. For years after I was ill, I felt guilty. I thought I’d let everybody down, including my band and the fans, because I’d stopped. But I know it was a positive that I pulled through to the other side. Having had my career taken away, it’s definitely what has motivated me to still perform today.”

Although he jokes about his expanding waistline, at 63 keen cyclist Martin looks trim. Fully recovered from cancer and in good health, he says he needs to keep fit for his concerts.

He explains: “Your audience wants to see you at your best. They’ve probably seen you look good in the 80s.

“You don’t want them thinking now, ‘I’ve paid a lot of money for this ticket and they’re crap.’ You’re only as good as your last performance, and there’s no hiding place if you’re up there in front of thousands of people.”

Before meeting his wife, Martin had been unlucky in love.

But he was able to turn his heartbreak into lyrics for the album The Lexicon Of Love.

He accepts: “There’s a lot of spite in Poison Arrow. It wasn’t written about one single person, it was about all the times you feel you’ve had your teeth kicked in by love. Your whole world crumbles if a relationship doesn’t go right.

“It’s exaggerated and it might not be rational, but it’s how you feel. I didn’t realise at the time how universal those feelings are.”

ABC’s romantic music to match Martin’s impassioned lyrics came from an unlikely source. Describing the sound of The Lexicon Of Love as “Cole Porter meets Motown”, Martin laughs: “I got into crooners from hearing my dad singing Frank Sinatra songs in the bath. ABC’s tour this summer with an orchestra is living out my Frank Sinatra fantasies.”

Going to Sheffield University to study English literature, he was asked to join local experimental group Vice Versa by future ABC bandmates Mark White and Steve Singleton. “We were bottled off at my first gig,” recalls Martin – an imposing figure at 6ft 3ins.

“We supported a punk band, and their skinhead fans rained bottles down on us. I still persuaded the promoter to pay us. I think that’s why Mark and Steve wanted me in the band: my height and my bulls***. The first rule in the pop handbook is never show fear, which still stands me well now.”

Recording The Lexicon Of Love was often equally dicey.

Although fashionable now, in 1982 Hoxton in East London was a rough area, where ABC’s studio was in the basement of a wig shop. The album was the first to be produced by Trevor Horn, who later made classic records with Frankie GoesTo Hollywood and Seal.

Martin reflects: “Trevor would take us out, walking down to eat in Whitechapel, and you took your life in your hands then. They were rough old streets, but it made us stay in the studio to focus on making the album.”

Occasionally, the studio was needed by other bands, whereupon ABC would borrow a facility owned by David Bowie’s producer, Tony Visconti.

What is happening where you live? Find out by adding your postcode or visit InYourArea

He recalls today: “Bowie showed up to Tony’s studio one day. There was a space in The Look Of Love’s music, and we were determined not to put a guitar solo there. Bowie said it’d be great to have me doing an answerphone message, trying to get through to the girlfriend who’s ignoring me.

“That became my speech. It was an omen, Bowie sprinkling his magic dust on our tunes. All these decades later, if I get a taxi, the driver will ask: ‘Did you find true love, then?'” ABC even made a film, Mantrap, to capitalise on their success.

Its lead actress LisaVanderpump later found fame in Real Housewives Of Beverly Hills. Now Mantrap is getting revived as part of a 40th anniversary boxset edition of The Lexicon Of Love later this year.

In 2016, songs in the same mood as the original returned Martin to the Top Five with The Lexicon Of Love II. He happily accepts it remains his calling card.

The tour is with the 50-piece Southbank Sinfonia, conducted by Oscar-winning composer Anne Dudley, who got her break aged 25 arranging strings on The Lexicon Of Love.

Martin ends: “Life isn’t all unicorns and rainbows, and everyone goes through the tough stuff. But the ecstasy of being in love is on The Lexicon Of Love too.

“It’s why the songs mean so much to people 40 years later.”