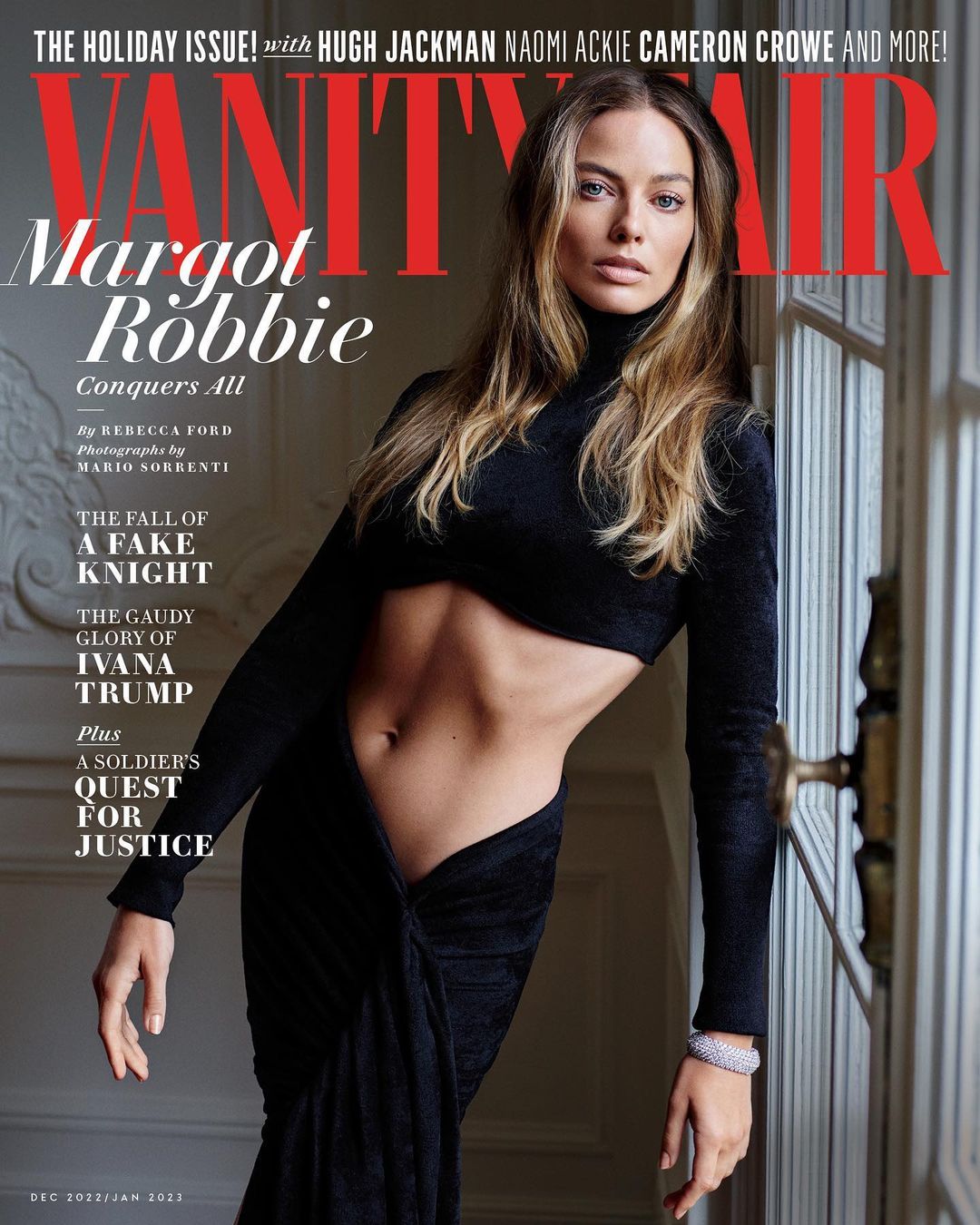 Margot Robbie covers the December issue of Vanity Fair, mostly to promote Babylon, which comes out just before Christmas. Robbie is likely to be the face of the film and the main actor doing promotion for it, especially given that Brad Pitt is also in the film and he probably won’t/can’t do any interviews to promote it. The VF piece is nice, almost boring, and I’m saying that as someone who likes Margot. She’s smart, which means she side-steps a lot of professional landmines within the interview – Pitt is only mentioned in passing and she has nothing but positive things to say about working on a David O’Russell film (and nothing particularly positive about O’Russell himself). She talks a lot about her work as a producer, which is very interesting. But I did feel like… a little scandal and controversy would probably help hype the film a little bit? I was left feeling like this was just a by-the-numbers celebrity profile. Some highlights:

The decadence of ‘Babylon’: “What you see onscreen is the chaos of making a movie and how f–ked it is, but also how it’s just the greatest thing ever. And, literally, filming it was the exact same thing. Sh-t was so unhinged and so fun and amazing and just absurd. It was definitely the best experience of my life. The way I try to explain this job—and this world—to people is that the highs are really high and the lows are really, really low. And I guess if you’re lucky, it all balances out in the middle.”

On doing on-screen nudity: “I don’t really have a whole lot of modesty left. I don’t feel embarrassed when it’s Nellie doing something. I’d feel embarrassed if it was me, but it’s all her.”

She hates being alone: “I grew up in a very loud, busy house, and so I feel safe and comfortable when there is just chaos around me. I think it’s why I love movie sets.” She hates being alone, she adds, and often invites friends to hang out in her trailer between takes.

Immediately after ‘Wolf of Wall Street’: “Something was happening in those early stages and it was all pretty awful, and I remember saying to my mom, ‘I don’t think I want to do this.’ And she just looked at me, completely straight-faced, and was like, ‘Darling, I think it’s too late not to.’ That’s when I realized the only way was forward.”

Dealing with paparazzi & invasions of privacy: “I know how to go through airports, and now I know who’s trying to f–k me over in what ways…. [but] If my mom dies in a car accident because you wanted a photo of me going in the grocery shop, or you knock my nephew off a bike—for what? For a photo? It’s dangerous but still weirdly nothing feels like it changes.”

She’s a working producer: She’s in those preproduction meetings, she’s on set, she’s putting out fires and getting “yelled at by agents.” When I point out that many actors who get producer credits don’t actually, um, do any producing, she says, “Yeah, that pissed me off. It’s so annoying because I have to fight every time. Then everyone realizes after a few months, ‘Oh, she actually is a producer.’ But even still, people direct all the money questions at my producing partners, never at me. And so many times Tom and Josey have to say, ‘She’s the one to ask, actually.’ ”

Next projects: Robbie’s also in preproduction on an Ocean’s Eleven prequel that she’ll star in and produce. Another franchise spin-off she’d been attached to, a Pirates of the Caribbean film, is dead, she tells me. “We had an idea and we were developing it for a while, ages ago, to have more of a female-led—not totally female-led, but just a different kind of story—which we thought would’ve been really cool, but I guess they don’t want to do it,” she says of Disney.

I totally forgot that she was loosely attached to some Pirates of the Caribbean spinoff or whatever – that’s weird that Disney didn’t want Margot to take on their extremely lucrative property. I wonder if Disney even wants to reboot it or have a spinoff? Hm. Very curious. As for the paparazzi… her family still lives in Australia, and there is a big paparazzi contingent down there. It’s not like American paps are flying to Australia just to get some shots of Margot’s mom. Those are homegrown paparazzi, taking photos for Aussie tabloids and Murdoch’s media empire. Also, I’ve never understood people who can’t be alone. I’m just built a different way – if I never had a moment to myself or had to live in chaos, I would go batsh-t crazy.

Obsessed with this photo, omg.

Britney Spears celebrates 'freedom' with her 'first glass of champagne': 'On cloud 9 the whole time'

Coronavirus may lead to 68% of aircraft being grounded

Sofia Richie: How She Won Over Kourtney & The Kardashians — Why Everyone ‘Really Likes’ Her Now