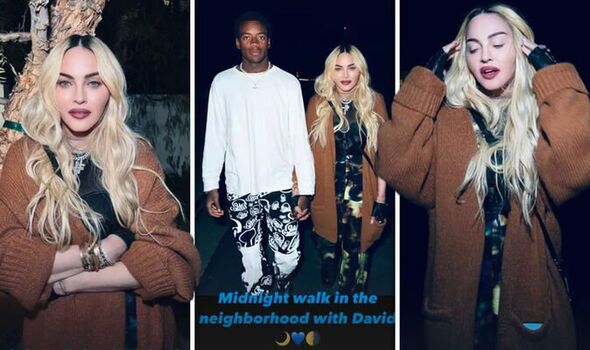 Madonna, 63, looks younger than ever as she steps out at night with teenage son David

Madonna, 63, took to social media to share some pictures of herself and teenage son David Banda, 16, having a late night walk. The star appeared more youthful than ever as she spoke about receiving “divine inspiration” from the moonlight.

Aside from David, Madonna has five other children, including daughter Lourdes, 25, son Rocco, 21, daughter Mercy, 16, and nine-year-old girls Stelle and Estere.

The star posed by the trees in her neighbourhood as she headed off on her walk with her adopted son David.

She wrapped up in a warm brown cardigan and wore her long blonde hair in waves.

The singer wore a black top with a semi-transparent cut-out and some camouflage trousers.

She accessorised with some bangles, a chunky crucifix necklace and a pair of fingerless gloves.

“Receiving divine inspiration in the moonlight,” she wrote under her first pic.

The next snap showed David, who looked just as stylish as his famous mum, dressed in a white jumper, paired with black and white trousers.

David, who held his mother’s hand as they walked along, accessorised the look with a silver necklace and chain.

Madonna wrapped up in a warm brown cardigan and wore her long blonde hair in waves.

Madonna captioned her picture: “Midnight walk in the neighbourhood with David.”

Madonna, 63, was dressed stylishly for her moonlit adventure

The singer wore a black top with a semi-transparent cut-out and some camouflage trousers.

Madonna, 63, said she became inspired by the walk

The star captioned her photos: “Receiving divine inspiration in the moonlight.”

David, 16, appears to take after his stylish mum

David wore a white jumper, black and white trousers and a silver necklace.

Dad blogger who has NEVER sung before becomes Christmas No. 1

Explained: Who was Sir Chettur Sankaran Nair, who took on the British in their own courts