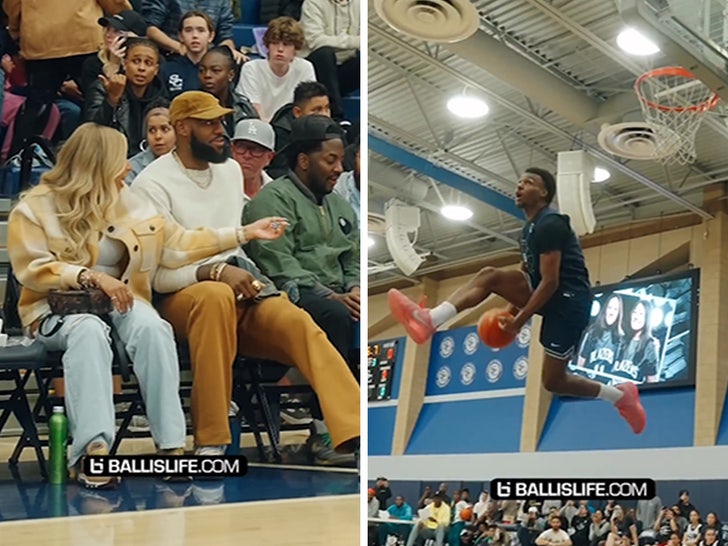 LeBron James‘ sons put on an absolute dunking clinic at a high school event on Thursday night — and Pops couldn’t have been prouder … catching the show from a courtside seat with a huge smile on his face!!!

18-year-old Bronny and 15-year-old Bryce took flight over and over again at Sierra Canyon’s “Midnight Madness” tip-off extravaganza in Chatsworth, Calif. … and, despite nursing a lower-body injury, LeBron didn’t miss a second of it.

The four-time NBA champ sat courtside with his wife, Savannah, as both boys routinely tore down the rim with a series of athletic dunks.

The two Sierra Canyon hoops stars looked a lot like their father in his prime … even managing to pull off a few slams where they put the ball between their legs.

The James gang had the crowd in awe at their athleticism … drawing the biggest cheers of the night.

LeBron certainly loved it all, too … but something tells us he hustled back home following the show — after all, the dude’s got a groin he needs to get healthy ASAP!

How Many Great-Grandchildren Does the Queen Have? Get to Know Her Smallest Royal Relatives

Salman Khan knows the reason behind the debacle of Tubelight – can you guess? | Bollywoodlife.com

Lauren Sanchez’s brother tells all on Bezos romance: ‘This was real’

‘BJP may win most seats, but 2nd term for Modi unlikely’: Sharad Pawar