Kardashian paired the gold corset top with a pair of black leather pants. 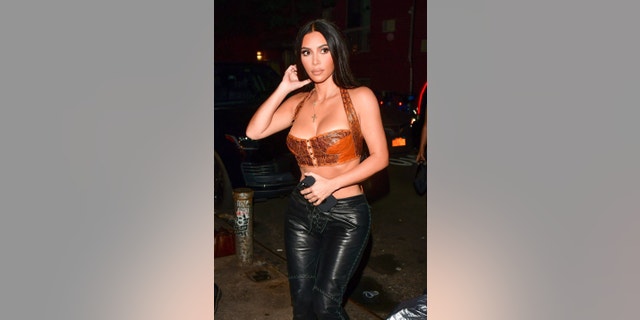 Kim Kardashian puts on an eye popping display in a strapless top and leather pants while out to dinner Thursday night in New York City. Kim was seen turning heads as she arrived at Carbone with actress La La Anthony, CMO of KKW Brands Tracy Romulus and Simon Huck. After dinner the group hit up Zero Bond.
(BACKGRID)

The star has been showing off her body lately. Last week, Kardashian shared a photo of herself in a tiny purple bikini while on a trip to Palm Springs to her social media accounts.

Kardashian’s night out in NYC comes on the heels of her divorce from the father of her kids and husband, Kanye West. The “Keeping up with the Kardashians” star filed for divorce in February after reports surfaced claiming the two had separated.

Kardashian addressed the divorce during a “Keeping up with the Kardashians” reunion in June.

“I honestly don’t think I would even say it here on TV but it was not one specific thing that happened on either part. I think it was just a general difference of opinions on a few things that led to this decision,” Kardashian told host Andy Cohen at the time.

Broadway-style musical Aladdin to return with a second season