Katie Price avoided being declared bankrupt in court on Tuesday after she was given three months to come up with a plan to pay off her debts, totalling more than £250k, including more than £20k in tax debt.

The 40-year-old was not present at the High Court Roll’s building in London as her team submitted proposals for an individual voluntary agreement (IVA).

It was previously reported that the hearing could see her formally declared insolvent, even though she who was once estimated to be worth £45million. 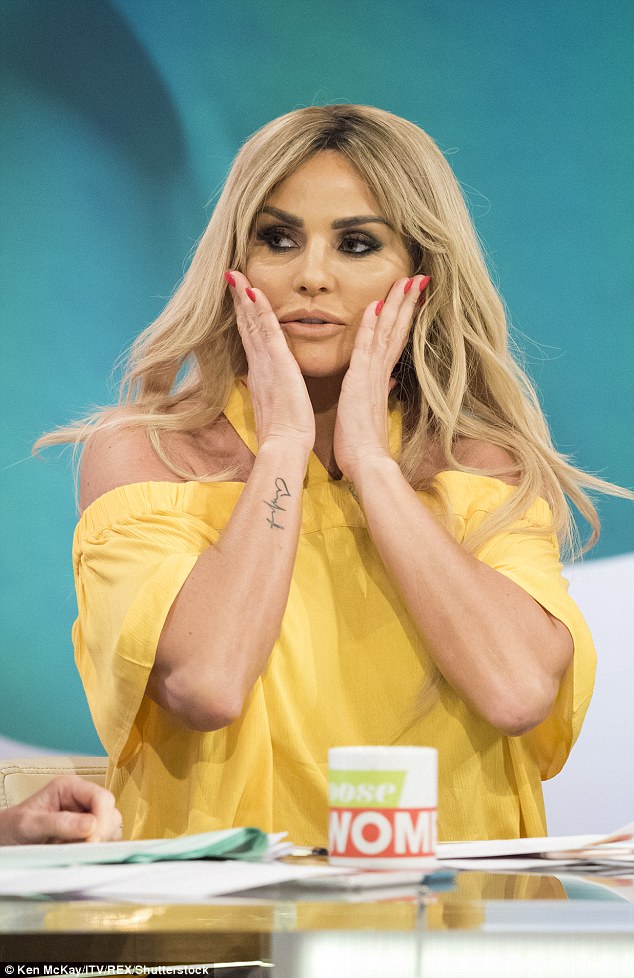 Sigh of relief: Katie Price avoided being declared bankrupt in court on Tuesday morning after she was given three months to come up with a plan to pay off her ‘more than £20k debts’

An IVA sees creditors paid back over an agreed period of time and her application will be heard in 12 weeks on October 30.

Katie has been bidding for months to stave off bankruptcy as her once-lucrative media empire began to fall apart following the demise of her third marriage and the collapse of her businesses.

She is said to already be trying to sell her £2million West Sussex mansion which she bought in 2014, as she faces a High Court hearing that could see her formally declared insolvent. 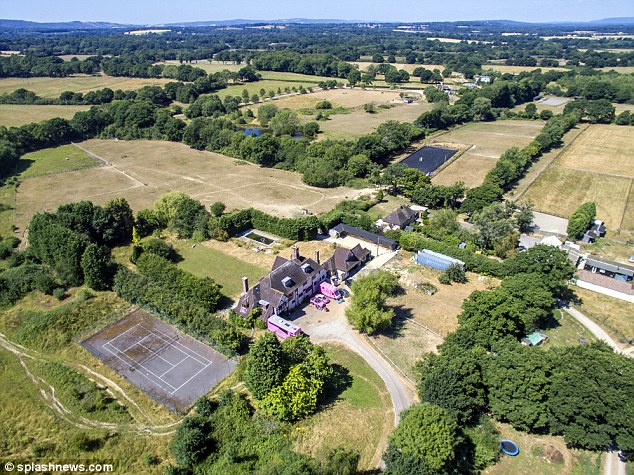 Debt: The TV personality is currently trying to sell her £2m sprawling West Sussex country mansion, which she bought in 2014 with her ex in a bid to avoid bankruptcy 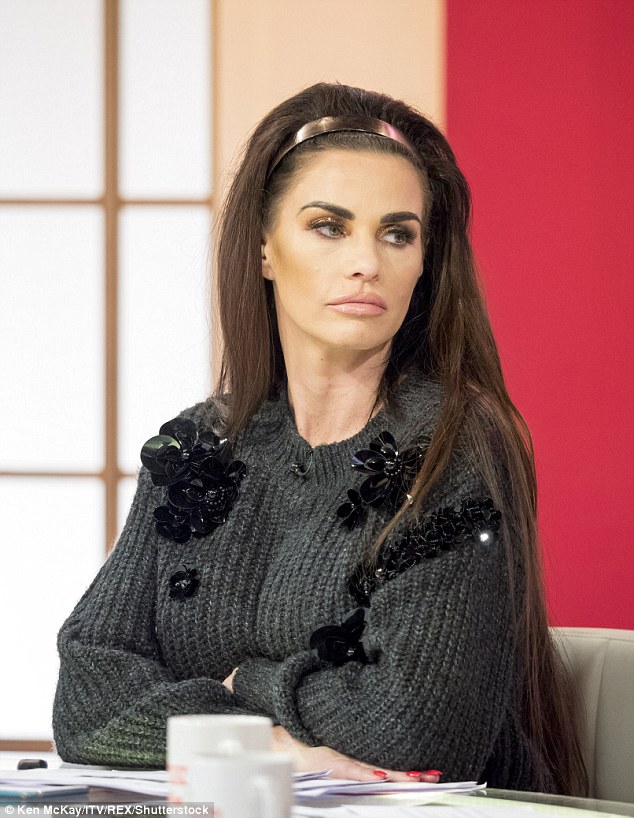 Doing what she can: The hearing, which lasted less than 30 seconds and which she did not attend in person, relates to tax owed to HMRC

WHAT IS AN IVA?

‘An IVA is a form of insolvency but it is different from bankruptcy.

She is also selling her beloved farmyard animals as her home is said to have fallen into disrepair, with the swimming pool and tennis courts abandoned.

Her representatives now have 12 weeks to come up with a plan to sort out her finances or she could face bankruptcy.

The hearing, which lasted less than 30 seconds and which she did not attend in person, relates to tax owed to HMRC.

A representative of HMRC said: ‘The debtors insolvency practitioners made contact with HMRC and is considering submitting an IVA proposal and HMRC is not contesting it.’

A debtors insolvency practitioner manages the affairs of an insolvent individually, partnership or company. 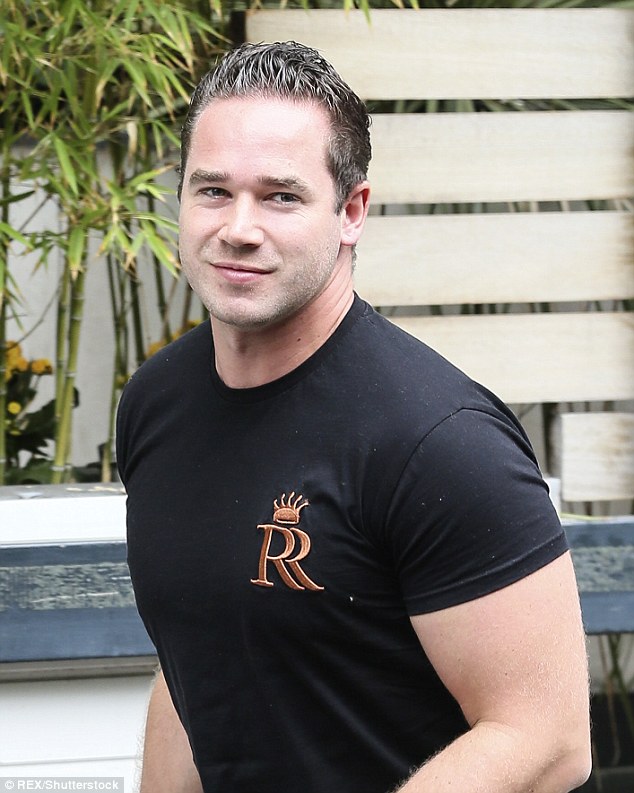 Blame: Katie hit back at claims that she refused to pay electrician Paul Bean the bill for his work last year and now blamed a pal of her estranged husband’s for sending the debt collectors 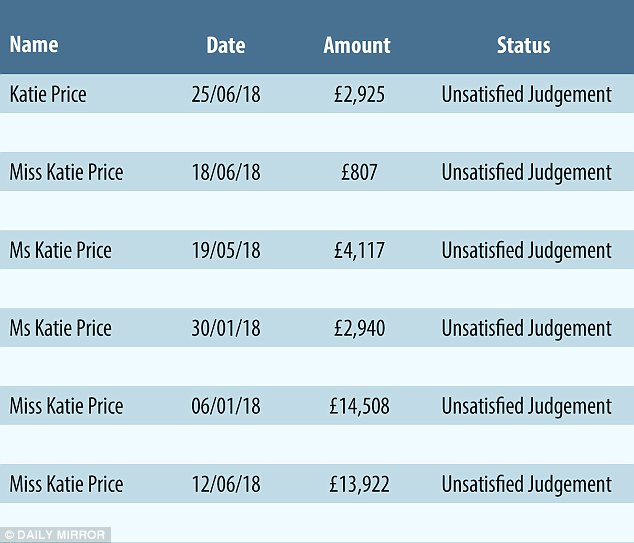 Struggles: The paper reported that the electrician had gone to county court to reclaim his funds, and that Katie was involved in four more county court disputes, totalling up to £22,000

In Katie Price’s case they applied to have an IVA made.

Judge Barnett, the Deputy Insolvency and Companies Court Judge in the High Court adjourned the hearing until October 30.

She is even selling her estranged husband’s Audi R8 Spyder which she bought him for his 30th last March, but cleverly kept in her name.

Public documents show that her label, KP Boutique failed to get off the ground after its 2016 launch, reportedly closing with just £13 in the bank. 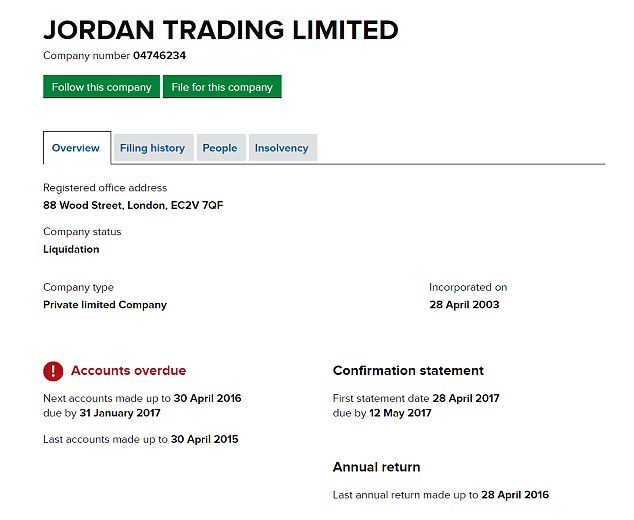 Worries: Jordan Trading Limited, went into liquidation in 2017, with final accounts from April this year showing claims against the company now reportedly totalling over £250,000

Another business, Jordan Trading Limited, went into liquidation in 2017, with final accounts from April this year showing claims against the company now totalling over £250,000, according to Daily Star.

The model took to Instagram to hit back at claims that she refused to pay electrician Paul Bean the bill for his work last year and now blamed a pal of her estranged husband’s for sending the debt collectors.

The former glamour model posted on her Instagram story and edited a headline from a publication to read: ‘Pricey pays for him again!’

Continuing to hit out at her ex, she wrote: ‘A lovely friend of Kieran’s sending bailiffs to my house for work he had done for Kieran… Watch this space.’ MailOnline have contacted Katie Price and Kieran Hayler’s reps for comment.

The paper reported that the electrician had gone to county court to try and reclaim his funds, and that Katie was involved in four more county court disputes, totaling up to £22,000.

A source told the paper: ‘Katie is really bad with managing her money and lets things get out of control.’

When questioned by the tabloid, the electrician revealed how he felt he was forced to get the courts help, adding : ‘I couldn’t hang about no more.’

A friend of Mr Bean’s continued: ‘Katie kept saying she was always going to pay but she never did. He wanted the money. It’s only three grand.’ MailOnline have contacted a representative for Katie for comment. 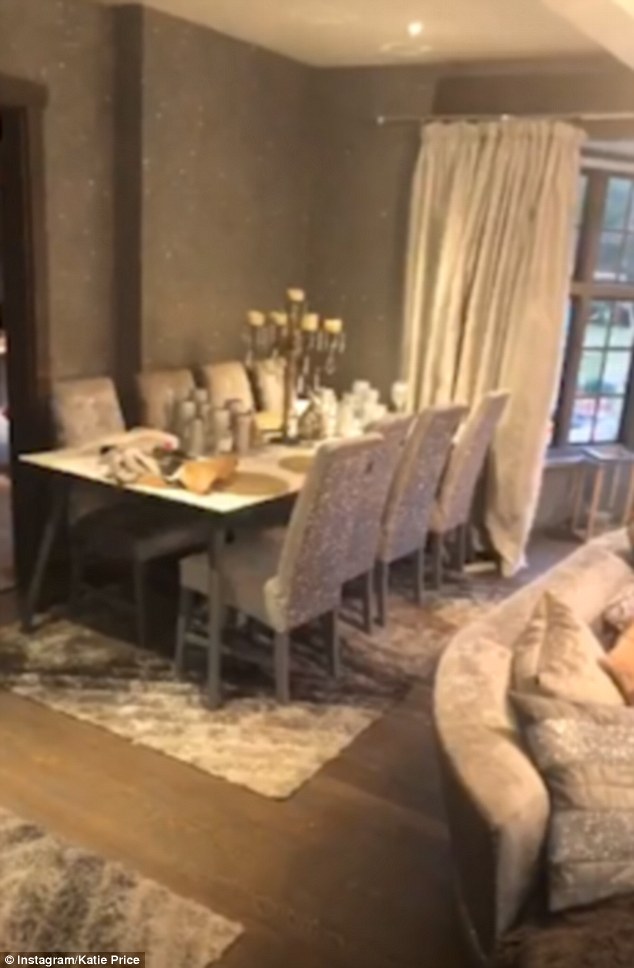 New look: It comes after Katie slammed her ex Kieran after she showed off her newly renovated home via an Instagram live on Friday

Katie has been embarking on sexy shoots in Thailand with new beau Kris Boyson in a bid to generate income.

A source previously told The Sun: ‘Katie has always been very proud of her reputation as a successful businesswoman, despite everything else that has been said about her.

They also report her shocking behaviour with toyboy Kris was a result of her desperately trying to avoid bankruptcy.

Her reported monetary woes comes after she slammed her ex Kieran while showing off her new house transformation during a candid Instagram live on Friday.

The TV personality was filmed having her eyebrows treated while new beau Kris Boyson, 29, stayed close by.

Being filmed by a friend, Katie’s pal panned around her freshly decorated room – which also featured 16-year-old Harvey – to show off her fresh new furniture and decor.

As the friend commented about how the sparkling lounge was ‘beautiful’, Katie quickly replied: ‘Yeah because Kieran’s gone’.

Late last month, Katie opened up about living with the former stripper beau – who gave up work to being a house-bound husband – and blamed him for the messy state of the house.

Speaking to Fabulous magazine, Katie admitted: ‘I’ve realised the house was disgusting – I don’t think he ever really kept it [clean]. I can see that now.

‘I’m house-proud. My sewing machines are back out, I’m making my curtains, I bought some pot plants for my front door and some hanging baskets.’

Earlier this week, it was claimed that Katie is shelling out a fortune on a string of extravagant luxuries each month.

According to Heat, the pin-up — whose rural home stands decrepit and unkempt — continues to splash the cash at an alarming rate on such, with her expenses including £1,500 on twice-weekly manicures and pedicures.

The TV bombshell is also said to fork out £11,000 on a sizeable team of staff to help keep things ticking over at her Sussex mansion, reportedly employing two nannies, a housekeeper, a stable hand and a gardener.

Katie bought her sprawling country mansion back in 2014, shortly after tying the knot with Kieran but the star’s recent financial woes in the wake of her divorce appear to have taken their toll.

Katie has previously denied ever having any monetary woes and claimed any reported difficulties are untrue.

The property in Horsham, West Sussex, once boasted stunning greenery and numerous luxury cars on the driveway, but is now home to an abandoned swimming pool and tired, overgrown facilities.

Her pad appears to be in a state of disrepair, after a tough year for Katie both personally and financially.

The tennis court looks like it hasn’t been used in years with its ripped net and dusty, worn down court, while the swimming pool is clearly out of action, with the usually bright blue water now a murky green.

There are toys and items of rubbish strewn across the front garden, while an old dumper lies to one side after attempts at renovation.

Katie confirmed she was splitting from Kieran after four years in June 2017, when his affair with their family nanny emerged. 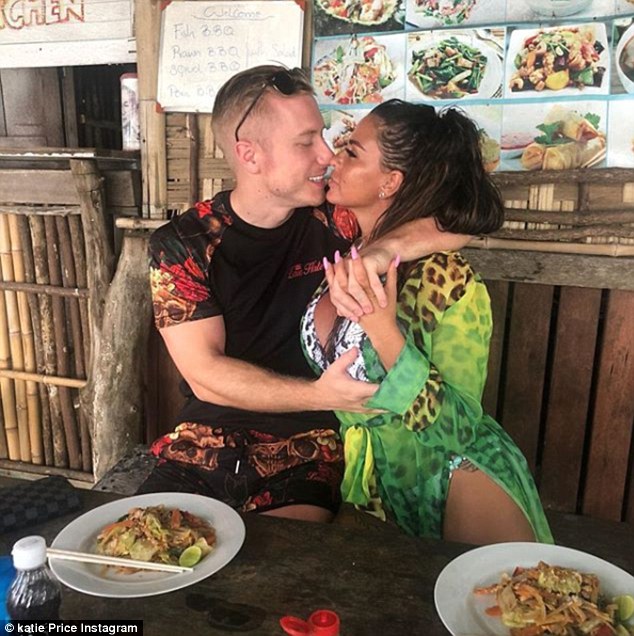 Loved up: Katie has since moved on with toyboy beau Kris and the pair have recently returned from a romantic getaway in Thailand

Aamir Khan: The writer is the origin and the most important aspect of the making of a film

Farah Khan says attacks on her weight, her kids’ religion pinch her: ‘That’s why I don’t post Diwali photos’