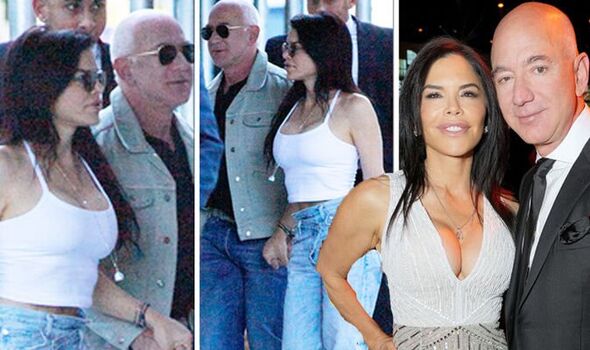 Amazon founder Jeff Bezos, 58, and Lauren Sanchez, 57, put on an affectionate display as the couple appeared in high spirits yesterday.

The billionaire boss walked hand-in-hand with his girlfriend as they exited a car before navigating the New York City streets.

The duo cut a casual display before stepping inside a hotel ahead of a charity gala the couple planned to attend.

Jeff kept his look simple as he sported denim jeans teamed with a black t-shirt.

He accompanied his attire with a khaki jacket teamed with boots and sported sunglasses to shield his eyes.

Lauren wowed as she rocked a tight-fitted vest top which highlighted her slender physique as she put on a busty display.

Jeff’s girlfriend flaunted her ageless looks as she teamed her attire with a pair of boyfriend jeans and trainers.

Her brunette tresses flowed loosely down her shoulders as she added a pair of sunglasses.

Jeff and Lauren were later pictured in attendance at the Robin Hood Benefit held at Jacob Javits Centre which aims to raise money and fight poverty for those struggling to live in the city.

The Amazon boss sported a black suit while Lauren appeared to spill out of her plunging grey dress which hugged her signature curves.

The couple posed up a storm as the entrepreneur’s girlfriend gave a glimpse of her assets.

The couple, who have been dating since 2019, was recently spotted out as they enjoyed a date night in the Big Apple.

The Amazon billionaire rocked jeans with a khaki jacket while his other half sported a pair of boyfriend jeans and a fitted tank top.

The Amazon founder looked smitten with his girlfriend as the couple put on an affectionate display.

Centre sends another advisory on lynching

What are Taapsee, Vicky, Tiger, Arjun up to?