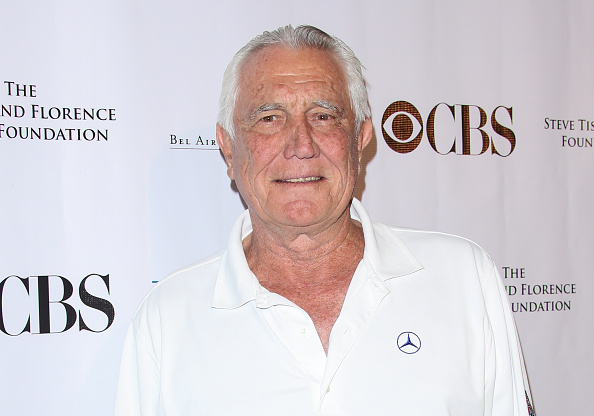 James Bond star George Lazenby has been axed from his own live theatre show in Australia after reportedly boasting about his sexual conquests, swearing and making homophobic remarks in an extraordinary on-stage interview.

Lazenby, who made one film as suave British spy 007 – 1969’s On Her Majesty’s Secret Service – had been touring his Australian homeland with The Music of James Bond in concert venues, being interviewed alongside live singing and a full orchestra performance.

At Perth Concert Hall on Saturday, it was claimed that children were in the audience and privy to his language and ‘unacceptable’ comments and recollections.

Taking to Facebook on Monday, the organiser Concertworks announced that the 83-year-old had been removed form the tour for the final Melbourne show, scheduled for Saturday September 17 with Aussie Pops Orchestra.

Producers apologised to ‘the audience, performers, conductor, WASO and the Perth Concert Hall’ as they ‘denounced’ the actor and mode’s conduct.

The statement posted on social media read: ‘Concertworks is extremely saddened and disappointed by George Lazenby’s language, comments and recollections during The Music of James Bond concert at the Perth Concert Hall on Saturday 10 September. These were his personal views and there is no excuse for this in today’s society. They do not reflect the views of Concertworks.

‘On behalf of Concertworks, we sincerely apologise to the audience, performers, conductor, WASO and the Perth Concert Hall.

‘Concertworks denounces Mr Lazenby’s conduct and the final Music of James Bond concert in Melbourne will proceed without Mr Lazenby in attendance.’

Although no recording has been released of Lazenby’s comments, an audience member recounted to local radio station 6PR what they remembered him saying, calling it ‘disgusting’, ‘creepy, offensive’ and ‘absolutely horrific behaviour’.

‘He spent all of the interview just talking basically about his sexual conquests, he was homophobic, he swore, he certainly wasn’t talking about his Bond movies, he downplayed the Queen, a day after she died,’ they said.

‘At one point he named an Australian cricketer whose daughter he was chasing and he said he dragged the daughter out of the pub and put her in the car in London, which is horrific.’

They added: ‘He named women he had slept with, and there were children in the audience, and a lot families who had brought their kids probably to their first classical music concert.’

The caller also remarked that if any women sitting in the audience had experience with sexual assault, there would have been ‘triggers’ in what he was saying.

A second caller to 6PR defended the actor, while not ‘condoning’ his actions, saying his stories were clearly ‘exaggerated’ for comedic effect.

‘He didn’t kidnap [her], there was no rape. People were just getting so woke. [The show] was very entertaining until people were yelling out and booing,’ they said.

Lazenby took to Twitter with an apology on Monday, saying he was ‘truly sorry’ if he offended anyone.

‘His recollections were personal views that may have reflected a time where such behaviour was tolerated, but has never been acceptable.

‘His comments were his own and do not reflect our society today. His views are not shared or endorsed by WASO or Perth Concert Hall,’ the group added.

Lazenby replaced Sir Sean Connery in the role of Bond but only signed on for one film, reportedly walking away from a major deal to reprise the part.

Since then he has appeared in TV series including The Pretender, Rituals and General Hospital as well as films in the 1970s like The Man from Hong Kong.

Metro.co.uk has contacted a rep for George Lazenby for further comment.

RBI to buy bonds worth Rs 20,000 crore via open market operations on Feb 10