‘As we grew up in service and became seniors ourselves, our commanders advised us to graduate to whiskey since rum did not suit the stature and ‘shaan‘ of a senior officer.’
Nitin Sathe recalls his encounters with whiskey on World Whiskey Day. 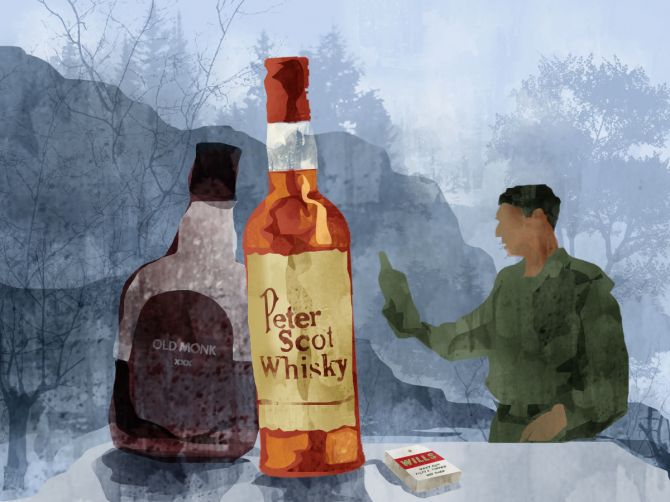 The thought of whiskey takes me back to 1984 when we were just commissioned.

Our basic pay was only ₹700-₹750 per month, and if one consumed the fiery yellow liquid (even at the subsidised cost that we got it) on a regular basis, he would be looking for loans at the end of the month.

So for us youngsters, it was rum and water available for a few paise to quench our thirst at the bar in the evening.

Greasy pakodas, peanuts and egg on toast were standard offerings to go along with the drinks.

The dark-coloured liquid was safer to drink; besides being much cheaper, it could be guzzled in large quantities without being worried about a hangover or a headache the next morning.

I for one, like my other friends, was afraid of whiskey since it invariably led to a heavy head the next morning.

In those times, the most affordable whiskey in the bar was Solan No 1.

This could be had by those slightly higher up in the food chain — our immediate seniors who earned a wee bit more than us.

The commanding officer and his second in command would invariably have the exotic Peter Scot (which, for many years I thought was a high-end Scottish whiskey), a bottle of which was reserved for him.

I think it is still around today, but overshadowed by the many sophisticated brands available in cellars across the many mess bars, but standing proud in one corner amongst sexy bottles of different shapes and sizes.

In the early days, we were quite oblivious to Scotch whiskey, which was way beyond our pay grade anyway.

Come a general or air marshal on a visit, and fancy bottles with fancy names would mysteriously appear on the ‘VIP’ bar counters along with the crystal glasses and the odd cheroot or cigar.

I am not including the navy here since our friends in whites in wardrooms of ships had taverns filled with all possible foreign spirits at cheap rates available for all and sundry.

We were quite envious of our friends in whites who had graduated to good whiskeys early in life, and not to forget the 555, India Kings and Marlboro.

The in between brands of whiskey available in our bar were Black Knight (BK) or Red Knight (RK) and an old saying that did the rounds was, ‘If you drank BK, smoked Wills Navy Cut and drove a Fiat, you were a general in the making.’

I remember a senior officer of ours who believed in serving whiskey to the senior officers he called over, but for us, the downtrodden, earthy types, it was Ghoda Rum that was always offered.

Once at a party in his house, we decided to finish off the stock of his horrible smelling and tasting liquid by pouring it over the plants in his garden.

He was soon out of stock of the cheap liquor and was forced to offer us whiskey that evening, a drink we quite enjoyed for a change.

The next morning, I am sure he smelled the stink in his garden full of roses, and realised why his youngsters had not got drunk on his duty-free rum (DFR).

Ghoda Rum or DFR, incidentally was called so because it was the cheapest of the lot, came as part of free rations, and was actually fed to the mules of the Animal Transport Company as an accompaniment to their meals.

The only Ghoda Whiskey I knew of was a lethally potent, dark yellow coloured liquid available for just ₹25 in Goa. This so-called whiskey was potent enough to knock a horse over!

As we grew up in service and became seniors ourselves, our commanders advised us to graduate to whiskey since rum did not suit the stature and ‘shaan‘ of a senior officer.

By this time, the Scotch market also opened up with the opening of the economy, and we got to taste this refined fluid available in our canteens at affordable costs.

More often than not, on all special occasions, it was a bottle of Scotch or champagne that had to be opened.

Even the bets between friends graduated from two large rums to a bottle of Scotch as our pockets had warmed up with few decent pay hikes.

Very few senior officers I remember didn’t change their drinks when they moved up.

When asked for a drink of their choice, they would say, “any rum with any water”. These unassuming officers would be happy with Panama or Charms to go along with their drinks.

I was once called over to Shillong to debrief the commander in chief on an operational mission.

The meeting was to be over a drink at his palatial home in the salubrious surroundings of the hills of Meghalaya.

A flying officer going for a drink with the C-In-C at his house was unheard of.

I was briefed on how to handle the crystal, how to say ‘thank you’, how to greet the lady, how to eat the different snacks that were on offer, what to wear, how to sit and stand — a complete course on soft skills.

As I finished with the brief with my flight commander for the umpteenth time on the eve of my departure, he asked me, “And when he offers you a drink what will you say?”

Pat came to my reply, “Rum and water sir!”

I was made to sit down again and explained how it was whiskey and only whiskey that was to be had with the C-In-C whether I liked it or not.

“Have you had a whiskey earlier?” he asked me as I got up to leave.

“Uff! Come, sit down. Let me make you get a taste of whiskey today itself, so you don’t make an ass of yourself tomorrow!”

I reached my room late that night, my head was abuzz with some weird whiskey in my veins. But the buzz felt nice and I was ready to take on more like that the next evening.

Time has come a full circle. Scotch (IMFL) has dried up in canteens and one needs to go ‘outside’ to get this lovely liquid from the swank shops that have sprung up at every corner in towns.

As we speak, some high-end Indian brands of whiskey that is as good and more expensive than Scotch have been allowed for sale in our unit canteens.

Considering the demand and supply differential, I feel it will take a while for it to be available easily to those low down in the pecking order.

Maybe, it is time to get back to good old rum again?

‘I learnt the difference between Want and Need’

WOW! What a summer collection

In Tamil Nadu, DMK has edge, but AIADMK hopes to ride on EPS image

‘Yoga is not a fad.. it’s deeply spiritual’