‘It is tabak maaz in Kashmir, siddu in Himachal, tikkad roti with gajar matar ki sabji in Haryana, khichu in Gujarat.’ 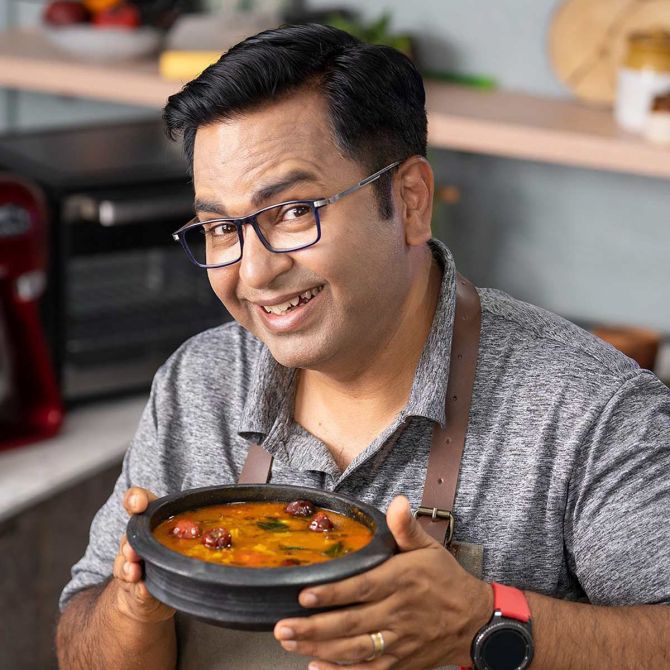 Chef Ajay Chopra is unapologetic about his love for Indian cuisine.

“Indian food is not just about one cuisine. Each state has one, and at times more than one cuisine,” he says, adding emphatically that people need to go beyond their limited favourites.

Ajay’s favourite states when it comes to food are West Bengal and Kashmir for their “depth of flavour and high cuisine finesse.”

The host of MasterChef India Season 1 and 2 feels “cooking is the ultimate skill because no one around you will ever be hungry.”

Before he made a mark for himself in the culinary world, Ajay spent hours just watching people cook.

“I would then return home and try to recreate the same flavours.”

His resume attests to his mastery of Indian and international cooking, and on social media he’d like to be known as the ‘global chef with a desi heart’.

The chef tells Anita Aikara/Rediff.com why he loves Mumbai’s vada pav, but not the city’s chaat, how Indian food can be diabetic-friendly and healthy, and why we need to turn our attention to India’s regional cuisines. 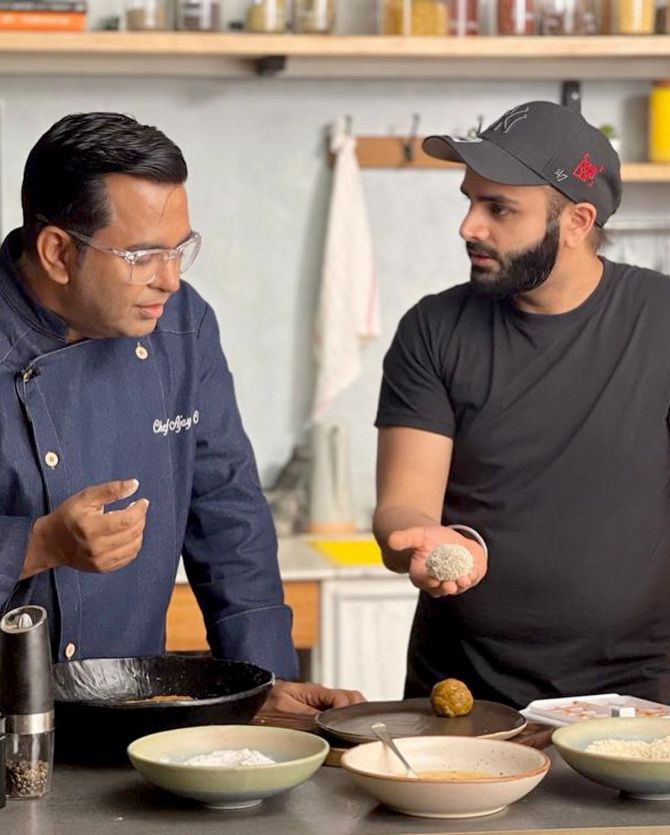 Which Indian state or city has the best street food?

If you have to call any place the Street Food Capital of India, it has to be Delhi. There is so much variety. It is a melting pot of cuisines.

You’ll get litti chokha, tikki, momos along with some outstanding north Indian and South Indian specialities.

Some of my other favourite hotspots of street food are Hyderabad and Lucknow.

Bangalore street food is starting to pick up.

For me, Indore has been the favourite place. Most people there live on street food like the Sarafa Bazaar culture where nobody cooks dinner. You just go out to eat.

Mumbai’s vada pav, pav bhaji and tawa pulav are survival street food. I love the misal pav in some places, but the pav bhaji is too buttery and spicy.

Vada pav, dabeli and masala toast sandwich are great, but not the chaat. 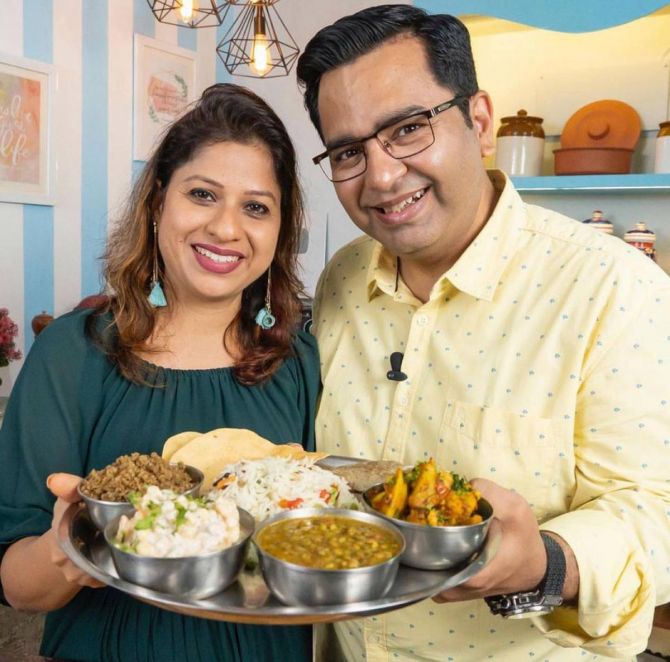 Three qualities one needs to be a good chef.

You need to do the job well, every single day, and make sure the last guest feels the same as the first guest you serve.

To become a great chef you need a great attitude as well; you got to be always ready.

Skill is key. But just having a few handy skills, doesn’t make you a good chef.

I tell young chefs to keep working on their skills. Like Gordon Ramsay says, ‘The day I stop learning, I am dead.’ It is important to continuously update yourself with what’s happening in the culinary world.

The most challenging part of judging a food reality show.

In Chef Versus Fridge, Shipra Khanna and I are not judging home chefs, but fellow chefs, which makes our task really difficult. You’ll see a high order of skill on the show.

As a chef, I’m always learning and was so thrilled to hear that just a week after we finished shooting, one of the chefs and his restaurant stood at Number 48 in Asia’s best restaurants list.

There I was judging a chef who had already made a mark in the world platform! I didn’t want to be a judge to them, but I wanted to be a fellow and help them out.

How did you introduce your love for cooking to your kids?

I didn’t need to explain anything. The love for food just oozes out.

The lockdown was a time when we as a family put together several meals.

Sunday is gourmet day, and that’s when I definitely cook. My wife and sons look forward to it. There are also times in a week when I pitch in and make a meal.

A dish that sums up home for you.

It used to be rajma chawal before. Now it is dal, chawal and fried fish.

Is it a great challenge to make Indian meals more healthy and diabetic-friendly?

India as a country doesn’t understand that if one has diabetes, then we should not consume sugar.

It is an absolute myth that Indian food needs a lot of oil and masala. You can cook tasty dishes with less oil.

Pan-India which dishes are gems of Indian cuisine?

India is not just about one cuisine. Each state has one, and at times more than one cuisine.

Indian food is not just butter chicken and biryani.

If you start counting dishes in every state, there are innumerable ones.

Every single Indian dish is a jewel.

My personal favourite states will be Bengal and Kashmir. The depth of flavour and cuisine finesse is so high.

They use such simple ingredients, but the food is outstanding. 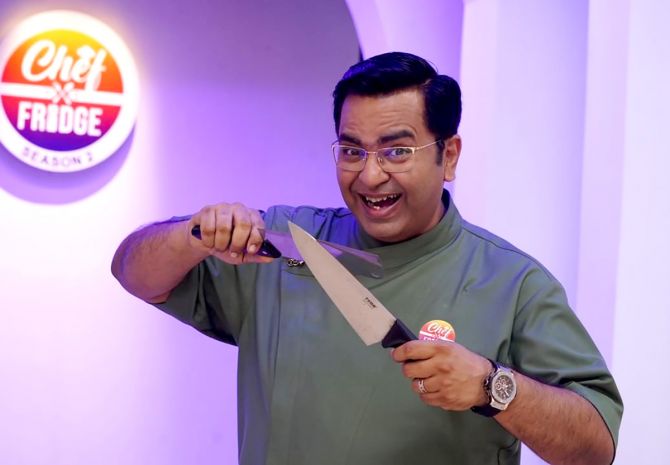 Which is your favourite spice?

Cardamom, I love it. Be it a dessert or a gravy, the spice just transforms the dish.

Spices ideally go in three layers in a dish. There are the ones that go right in the beginning in the hot oil like jeera, cinnamon, cloves and cardamom.

The second layer is the powdered spices and the third are the finishing spices like powdered garam masala, which lifts the dish.

A technique of Indian cooking that is getting lost.

Braising (a technique that uses both wet and dry heat) is used very often in Indian cooking, but it is not talked about much.

When you make nalli nihari, it is braised, it’s dry roasted with a masala, then liquid is added to it and it’s slow cooked.

Slow cooking methods need to come back into the limelight.

The cuisines from the North East, be it Assam or Mizoram. They have so much depth to them.

When we talk about Hyderabad, we limit ourselves to its biryani.

When we talk about Kerala, we think of dosa and idli.

There are millions of dishes in these regions that are not even spoken about. People need to go beyond their limited favourites. 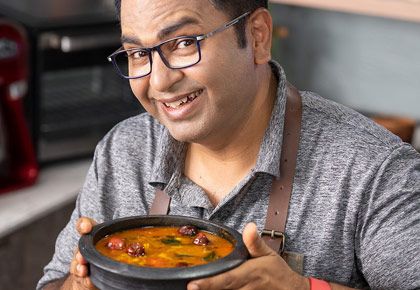