It’s not uncommon to see youngsters start a company in India.

In fact, we have heard about innumerable start-ups by young Indians that went on to become unicorns.

But this is the story of two housewives who are in their fifties whose start-up has become successful in a short span of time.

In 2017, Nisha Gupta and Guddi Thapliyal launched Geek Monkey, an online gifting platform, with a small investment of Rs 150,000. Today, the company has an annual turnover of approximately Rs 2 crores (Rs 20 million).

While Nisha Gupta is an arts graduate and comes from a family of entrepreneurs, Guddi Thapliyal has only studied up to Class 5. She has never worked or done any business.

Nisha used to sell household items and a few gifts at a shop when she was young, from where she learned the tricks of the trade.

“My kids who are IT professionals told me to go online,” Nisha tells A Ganesh Nadar/Rediff.com over the phone from Dehradun where they have an office and a godown. “Guddi was also interested so we decided to go online with Geek Monkey,” she says.

The company has another godown in Gurugram where the products are stored.

“Everybody has a budget, but no one has an idea of a gift that is useful and meaningful, like you should give a paintbrush to an artist and a pen to a writer,” Nisha reveals the idea behind Geek Monkey.

Both Nisha and Guddi wanted their gifts to be different from other Web sites so they put up personalised and customised gifting options on their Web site.

Nisha works closely with vendors who sell on their site. They have a team that searches for gifts and suggests them to Nisha and Guddi who finally select the ones that are sold on their site.

“Whenever I select a gift for our portal, I think if I would give that gift to others while also keeping the expense in mind,” says Nisha.

“Our children also research new gifts, but the final decision is made by us,” she adds.

Guddi insists that their handicrafts will not be available anywhere else because they are hand made by artists that work with them.

Nisha is connected to at least 12 such vendors who were artisans who supplied local handicrafts.

According to Guddi, one of the key reasons for their success is personal interaction.

“As a policy, the company interacts with every customer who places an order,” she says.

Together they work on a net profit of 5% to 6% annually after spending on advertisements and building infrastructure in the past year.

In March 2020, the nationwide lockdown came with its fair share of problems.

“We were getting orders, but could not supply them between March and May as the courier companies were not working,” says Guddi.

“In July we were selling rakhis and gifts. We added an option for people to record their voice to send along with the gift,” says Nisha.

One of their special gifting options is if a customer sent a photo, they make a doll resembling the features of the person in the photo.

They have both handmade and machine made gifts on their site. Some of the machine-made gifts are sourced from other countries.

“We have a fixed price for certain items made by artistes. When the customer wants something more, we charge accordingly depending on the work involved. We allow the customer to talk to the artiste directly to tell them what they want. We discuss the price with the artiste and then charge the customer. We operate on low margins,” explains Nisha.

Their lowest priced item costs Rs 99 which is inclusive of courier charges. Their highest priced item is a couple of dolls that are made with actual photos, which cost Rs 13,000.

Although their Web site was initially set up by their children, it is now handled by professionals. They have a 11 member team that handles orders and ensures deliveries reach on time and collects payment..

“We also hire people on contract when we need them,” Nisha adds.

At the moment they have 600 gift items listed on the site. Except handicrafts that are made to order, all other products are stored in their godown.

“I plan to buy more products from people who make handicrafts. This will encourage local artistes,” says Nisha.

Curious to know how the partners met? Well, Nisha’s daughter is married to Guddi’s son. :)) 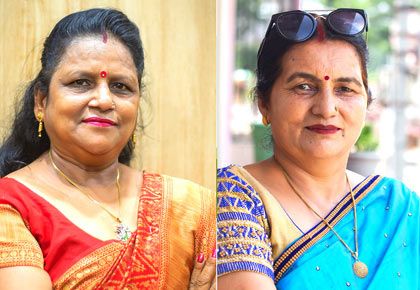