Yet their matching colours are not all the fashion designer and retired cricket commentator, who met on the fourth series of The Real Marigold Hotel, share. “You look marvellous,” Henry tells Zandra as he eases himself into an armchair next to his friend, her neon pink hair poker straight and her make up immaculate. “Oh, well, you see, they thought I had to be disguised for the photographs,” she teases.

Due to the pandemic, this is the first time the pair have met in person since filming in India in 2019 but a natural warmth and wit pervades their conversation interspersed with frankness, wisdom and gossipy naughtiness. They are glorious company.

We are talking in the rococo splendour of the Grade I Georgian building, House of Saint Barnabas, in Soho, central London to discuss their roles delivering live virtual classes for a new over-55s lifestyle membership platform, Goldster.

Zandra, aged 80, is famously a workaholic while “Blowers”, 81, remains a fixture of broadcasting and writing despite his retirement from frontline television punditry in 2017, and both are fiercely anti-ageist. In fact, they’re ideal advocates for activities ranging from fashion and painting to Tai Chi and life coaching.

Yet even they have been touched by the hands of time. Zandra disclosed in November that she was in remission from bile duct cancer and reveals today that her tumour was initially considered so serious doctors told her she “might have six months” to live at best.

Despite such admissions of mortality, the mood is fun, bouncy and definitely full of life as we discuss healthy living. 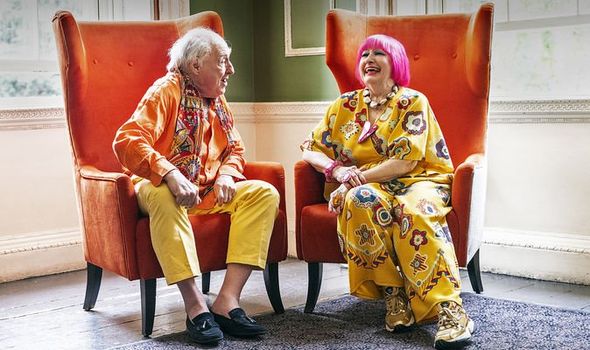 Goldster was founded by Scotsman Mike Reid, an entrepreneur whose umbrella organisation, Care Visions Healthy Ageing, works with medical researchers and experts to create holistic, non-drug interventions for the elderly.

It offers 300 classes a month, each one rated for how it benefits the mind, body and soul. This will feed into longer-term medical research about how to encourage older members of society to stay active and engaged with their surroundings. Membership is £9.99 per month but potential users can enjoy a 30-day free trial.

Blowers and Zandra are among 50 presenters, some yet-to-be unveiled celebrities, others simply experts in their field, hosting the programmes. Zandra’s first two classes have focused on her fashion journey and some of the famous names she has dressed. She admits to some nerves – juggling a commentary with live questions over Zoom is tricky. “It’s not quite the same as when people can shout out to ask questions.”

“I’m lucky as I was born with a thick skin,” she continues. “One of the girls said, ‘Do you mind that people are always looking at you?’ I don’t always notice. I look back at some of the pictures of myself and I look like I’ve had my face bashed in. You think, ‘Why do you look like that?’”

Henry, uncharacteristically quiet for the last three minutes, looks a little lost so I ask him how his online tutorials are going. His first two sessions covered his cricket broadcasting career and, interestingly, greed. “I come from a strange, old-fashioned background,” he explains. “It’s quite intriguing, it makes people raise not one but two eyebrows in the modern age.” 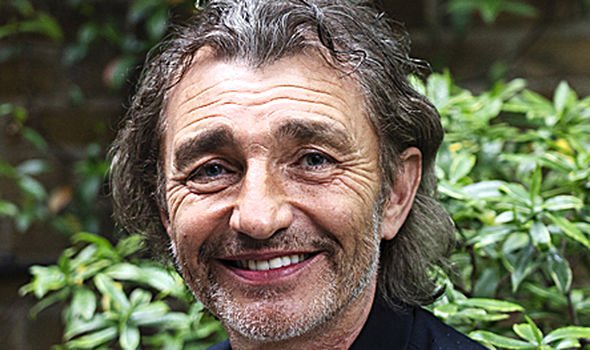 A scion of a landowning family, Henry was raised in Norfolk and educated at Eton. His father knew Ian Fleming at Eton and their surname was the inspiration for the James Bond villain, Ernst Blofeld.

Cricket fans have long adored his plummy, mellifluous voice, as has Zandra. “I’d always listened to him on the radio talking about cricket so it was like meeting my idol,” she says. Henry jumps in: “I’m in the process of turning what I’m wearing into a jumpsuit”, referencing Zandra’s outfit.

There is raucous laughter from the room full of PRs and stylists. These two love an audience. Their friendship blossomed in India – they were the two oldest members – where, along with Britt Ekland, Duncan Bannatyne, Susie Blake, Chuckle Brother Paul Harman Elliott, Barbara Dickson and John Altman, they visited festivals, health practitioners and retirement homes. While Zandra endured a night train ride to a temple – “Bad luck, I didn’t do that,” says Henry – he took part in endless yoga with Paul.

Once home, he vowed to do 20 minutes a day of meditative practice – though admits today: “I say a lot of things.”

Will Zandra invite the gang around for one of her legendary dinner parties now lockdown restrictions are easing?

“If they are here,” she begins. “I mean some of them are so exotic that they spend their time in Portugal or wherever with their photographs on our joint thingy-me-bob.” 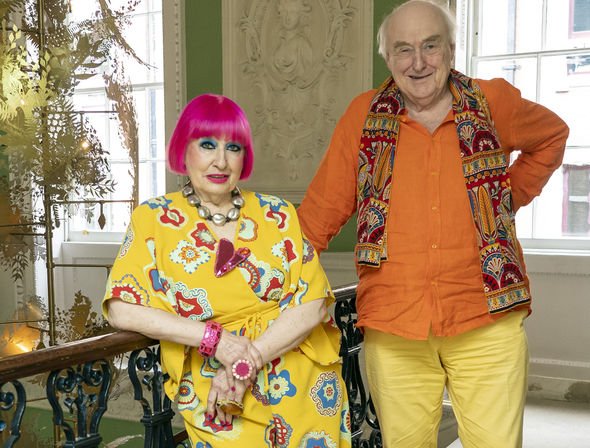 “Or Monte Carlo,” adds Henry. Do you mean you have a WhatsApp group?

Yes, Zandra says, which she “vaguely” follows. Henry, on the other hand, ignores it. He’s too busy enjoying life.

“I approach life the same way. I’ve never made any concessions and I’ve no intention of doing so. If I find myself in a wheelchair or in bed at the end of my life, I shall get 10 out of 10 from whatever I’m still able to do then.” Zandra injects with a “few rules”: “You wouldn’t catch me out in a mini-skirt but, apart from that, there aren’t many others. My hair will be forever pink.”

To which Henry adds: “My hair will forever have disappeared. We have one thing in common actually, Zandra, apart from our clothes – neither of us are going to have grey hair!” They are so exuberant now, I feel guilty for the abrupt bump to earth that follows next. Just before the first lockdown, Zandra was doing yoga inside her kaleidoscopic London penthouse when she noticed her stomach felt full despite eating nothing that day. Unbeknown to her, a tumour was growing inside. 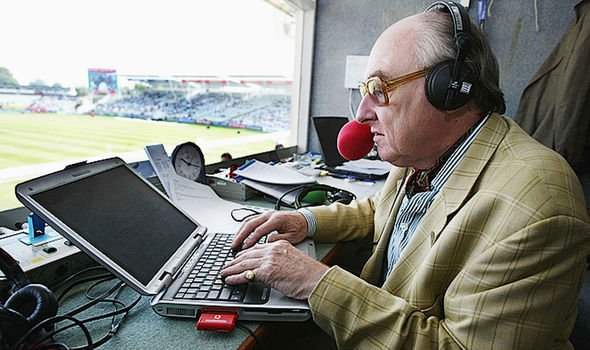 “I was given X-rays and was told, “Oh, yes, you’ve got a growth, or whatever they call it, in my bile duct, and you might have six months,” she says.

Before there is any time to react, she is off again: “So I said, ‘It’s good, it’s lockdown, we won’t tell anyone because I’ve got my IKEA [collection] not being launched until September 2021. I had to have chemo for three months and then they said, ‘Oh, it’s been very successful and you’ve got a few more years’.” However, the health scare prompted her to launch the Zandra Rhodes Foundation and get her financial and legal affairs in order.

“I made sure my will was non-resuscitate,” she says. “I can’t understand why it didn’t throw me, it just made me concentrate more.”

She wasn’t frightened? “I don’t know why it wasn’t terrifying,” she admits.

Now she has more work than ever before. In between chemo sessions, she was mastering selfies for work. “Attitude and mind does almost as much as the doctors,” chimes in Henry.

She only revealed her diagnosis in November at the behest of doctors to encourage others with symptoms to come forward. By that point, Zandra’s cancer was in remission and she felt more relaxed. “I thought if I was still dying, I might have lost a lot of work,” she half jokes. 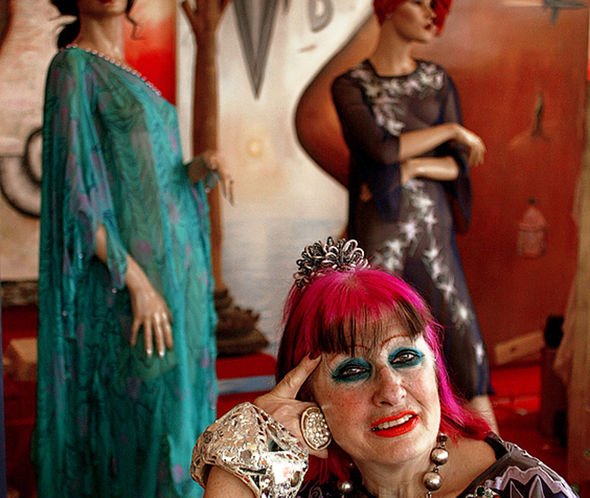 She continues: “In one of the [Marigold] episodes Henry goes to someone and the guy feels his foot and says, ‘Oh, you’ve got a growth’. I thought, I’m glad they didn’t send me on that as he would have said…” – she descends into peals of laughter – “…‘Oh, you’re not gonna be here’.” Henry interjects: “He said you’ve got problems with your liver and I said, ‘If you drank as much as I do, you’d have problems with your liver’.”

He loves a drink – “I make the best dry martini in London” – and explains how “shaken, not stirred”, James Bond’s preferred method, is incorrect as it melts the ice and weakens the drink. At the age of 17, having been knocked off his bike by a bus, he was unconscious for 28 days and underwent 14 brain operations, ending his career as a batsman and wicket-keeper.

It “hardened his attitude to life” and he vowed not to go through life thinking, ‘If only…”

He explains: “It’s so boring, so negative. Never feel sorry for yourself, it’s the worst of all the feelings, it’s so counter-productive. Look ahead, enjoy, and always attack life. Get onto the front foot.”

This attitude was tested in 1999 when he developed angina and, at one stage, was given last rites in front of his family. “They all thought I was going to die, they really did,” he says. 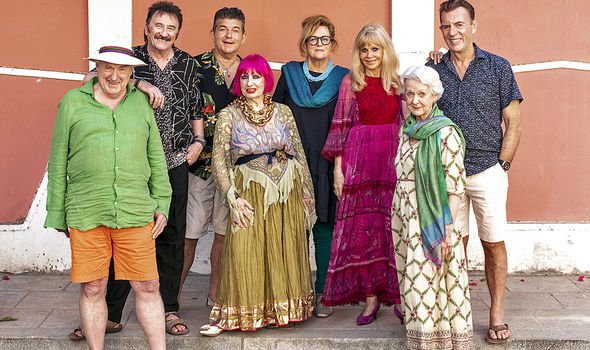 “My brother-in-law, a parson, arrived with a great vial of holy oil in the Harley Street clinic.

“When he anointed me, he lost the cork and practically drowned me.”

Fortunately, a double heart bypass operation got him back on his feet. “When I get ill, I tend to get ill in capital letters,” he says. What does he hope people will take from watching Goldster?

“It’s about the importance of having a zest for life, wanting to be curious and having objectives. You want to attack life and to look for ‘trouble’ for it leads to fun.

“Not sure if that goes against the ethic of Goldster,” he shouts over to Mike. “Love it,” comes the response.

Henry and Zandra both want to work for as long as they can. Henry has carved out space for love in his life. He married his third wife, an Italian woman called Valeria, in 2013. She, Henry, Zandra and ex-Marigolder Susie are off to dinner later.

Zandra’s long-term partner, US film producer Salah Hassanein, died in June 2019. She abandoned filming in India to race to his bedside in California. Is it too early to consider the possibility of love again?

“I’ve got too much to do to think about that,” she replies quietly. “Something like love only comes along when you’re not looking.”

Henry jumps in again: “One of the great things about being 80 is that those inclinations don’t apply anymore. If you have romantic pulls and pushes at my age, you only end up making a fool of yourself.

They both understand lockdown has been tough for older people who have struggled with shielding, isolation and, in many cases, bereavement.

“We’re trying to lift people out of a rut many people don’t realise they’re in,” adds Henry. “I hope we will make them aware there are many more possibilities to be explored…” Zandra finishes his sentence: “And you don’t have to feel shut in. Covid isn’t going to go away that quickly. There will be ups and downs but people will have expanded more to know what they want to do with themselves.” She adds: “And they will have us to listen to.”

It would be mad not to – they are the very essence of va-va-voom.

● For more information, or to join one of Zandra’s or Henry’s classes, visit www.goldster.co.uk

A long wait for the tanker in Prakasam

Pati Patni Aur Woh director on muting rape line: ‘In one film someone says balatkaar 36 times and everyone was laughing’