‘The minimum holding period for equities should be three years.’
‘Try goal-based investing.’
‘Link your equity portfolios to specific goals such as retirement, purchase of a house or car…’

The incessant slide in the stock indices has unnerved even seasoned stock investors.

For investors with a high risk appetite, however, the present correction offers an opportunity to pick stocks at attractive valuations.

The markets could correct further if inflation remains high, forcing central banks such as the US Federal Reserve and the Reserve Bank of India to hike interest rates and tighten liquidity.

“The near-term outlook for economic growth and corporate earnings is not particularly encouraging. Further corrections in the equity market can’t be ruled out. The equity market will remain volatile in the near term with more downside than upside risks,” says Pradeep Gupta, co-founder and vice-chairman, Anand Rathi Group.

“The slide may continue and the Nifty 50 could fall to around 14,000 in the worst-case scenario. That’s about 46,500 on the Sensex. Another 10 per cent downside from current levels appears likely,” he says.

The negative sentiment globally is affecting the Indian markets, as is evident from the massive sell-off by foreign institutional investors.

But if the Russia-Ukraine war ends, and central bank action manages to stabilise inflation, sentiment could reverse.

“The Indian market is much better placed than most global peers. As soon as sentiment improves, we expect the Indian market to rally faster than other markets, as was witnessed between late March 2020 and mid-October 2021,” says Gupta.

“Equity investing does seem attractive at this point on account of valuations. Over the next six months, investors should gradually complete their planned allocation to equities,” says Jhaveri.

“Contra investments are high-risk, high-return bets. Only experienced investors should take such bets. New entrants should avoid them.”

Based on their research, they should prepare a list of the ones they would like to buy in their portfolios.

Besides identifying the names, they should also estimate the valuation at which they would like to purchase them.

Then, as the market correction brings those stocks to desirable valuation levels, they should buy them. 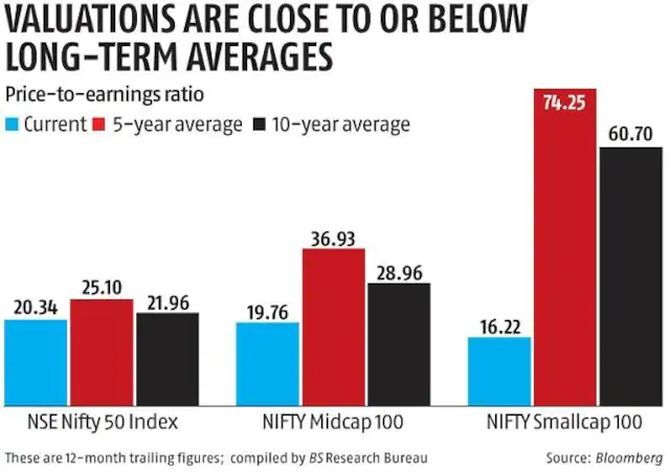 Not all sectors will participate in the next market up-move, as and when it comes, hence investors need to be selective in allocating their money.

“We expect FMCG, auto and pharma to perform well when the market recovers,” says Bajaj.

Gupta has a different set of picks: “From a one-year perspective, we are positive on financials, information technology, and investment-related themes such as infrastructure, capital goods, and cement.”

“Over the medium term, we are more positive on mid-cap stocks. During the ongoing phase of volatility, however, large caps are likely to outperform mid- and small-cap stocks,” he says.

According to Jhaveri, senior citizens should stick to large-cap stocks, while younger ones may include mid- and small-cap names as well in their portfolios.

If you already run an asset-allocated portfolio, the ongoing correction in equities would have made you underweight on this asset class.

This is a good time to rebalance your portfolio by pumping more money into equities.

“Use the current market correction to increase your equity holding to the extent that your asset allocation permits,” says Gupta.

Given the risk of further correction, avoid lump-sum investments. “Average out the cost of your purchases over the next few months,” says Jhaveri.

“The minimum holding period for equities should be three years. Try goal-based investing. Link your equity portfolios to specific goals such as retirement, purchase of a house or car, and so on,” says Bajaj.

When you do so, you will sell your holdings either when your goal is achieved, or when the stock’s fundamentals deteriorate.

Jason Sudeikis: The theme of Ted Lasso is universal

Govt strips Gandhi family of SPG cover, to be given CRPF Z-plus security

Good Friday 2019: What is Good Friday, history and significance