Virtual cast reunions serve as entertainment and fundraisers during self-quarantine

Cast and stars seem to have become nostalgic while staying at home with virtual cast reunions entertaining viewers while also raising money for charities amid the COVID-19 pandemic.

The world as we all knew it changed a lot in 2020, especially with respect to how we communicate with one another.

Thanks to the debilitating coronavirus pandemic which has impeded our ability to physically convene amongst our closest friends, family members and peers, new and innovative ways were established designed to bring us together and keep us sane while many quarantine and shelter in place.

Once upon a time, seen as a cheap way to drum up conversations around showbiz productions way past their heyday, 2020 has seen a resurgence in cast reunions as fans with nothing better to do than to watch re-runs of their favorite films and series have flocked to see their respective players in one virtual meeting space as they reminisce about the good ole days on set and peek into each other’s personal spaces.

Reunion shows and virtual table reads have simply become commonplace for fans and stars alike to pass the time while providing a much more informal setting for letting loose and trying out your best (or worst) jokes and for many, raising money for good causes in the process.

Here is a roundup of some of the best cast reunions of the year.

Thanks to the venerable Katie Couric, a virtual cast reunion for "The Parent Trap" was able to see the light of day. The 1998 comedy which featured Lindsay Lohan playing two versions of twin sisters enjoyed a revival of sort when Nancy Meyers and co-writer and ex-husband Charles Shyer jumped on a video call alongside Lohan, Dennis Quaid, Elaine Hendrix, Simon Kunz and Lisa Anne Walter to discuss life, their time on the film and raise money for the World Central Kitchen.

Orchestrated by Dane Cook, the "Feelin’ A-Live" virtual table read of the classic 1982 coming of age comedy featured what many believe to be the most-wanted reunion when it bridged the virtual distance between exes Brad Pitt and Jennifer Aniston.

"Fast Times" actor Sean Penn joined the star-studded gathering that was unique in the sense that no one on the call knew which characters they were reading for – a rule that made for some very exceptional moments. Others on the charity roundtable read included Jimmy Kimmel, Morgan Freeman, Henry Golding, Shia LaBeouf, Matthew McConaughey, John Legend and Ray Liotta. 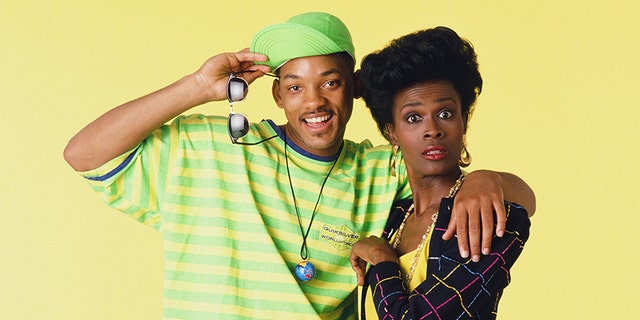 In an even bigger splash, Smith and "Old Aunt Vivian" — as fans have come to know Janet Hubert as before she was replaced by Maxwell Reid as Vivian Banks — also reunited for the first time since their public fallout and hashed out their 25-year-old schism in front of the world in an HBO Max special.

Surprisingly, the 30-year reunion also served as the first time Hubert had ever met her replacement, Maxwell Reid.

The Maryland couple got engaged at a gas station in a similar fashion Krasinski’s character Jim Halpert did on the show.

"And then he got down on one knee," recalled Susan. "And he was like, 'Just like Jim, I can't wait any longer.'"

"C'mon now!" Krasinski exuded with his hands raised. "That's the stuff, John. That's the sweet, sweet stuff… Congratulations, guys. You now have proved that that proposal works 100% of the time now."

Tracee Ellis Ross connected with her "Girlfriends" Jill Marie Jones, Golden Brooks and Persia White during an Entertainment Tonight panel to commemorate the 20th anniversary of the long-running sitcom which was co-executive produced by Kelsey Grammer, from Sept. 11, 2000, to Feb. 11, 2008. It was canceled amid the writers strike happening at the time.

‘GOLDEN GIRLS’ TO BE REENACTED BY TRACEE ELLIS ROSS, REGINA KING, OTHERS IN VIRTUAL WATCH PARTY

Ross ended the touching virtual session by praising her co-stars, saying, "I feel so proud of what we did together."

The event raised $500,000 for the Wisconsin Democratic Party and the group reconvened earlier this month for another reunion benefitting America Votes.

The entire cast – including a paper cut-out of fan-favorite animated Lizzie (played by Hilary Duff) – banded together on May 11 to deliver a table read of the season one episode, "Between a Rock and a Bra Place," thanks to Jake Thomas, who played Lizzie’s kid brother Matt, as Thomas organized the effort which was also attended by show writers Nina and Jeremy Bargiel and Bob Thomas.

A reboot of the series has since been stalled.

Thanks to Tina Fey and Katie Couric, the cast of "Mean Girls" connected in a big way for a reunion of the classic and often-referenced classic coming of age film on Oct. 3 – which is also recognized as "Mean Girls" Day.

During their Zoom reunion, the cohort issued a table read of the season 5 episode, titled, "Cooperative Polygraphy," which viewers will recall drops the study group in the campus library following Pierce’s (Chevy Chase) funeral where they’re read his will. "Narcos" and "The Mandalorian" star Pedro Pascal stepped in for Walton Goggins during the virtual read as the rambunctious estate executor.

Released on April 6, the virtual reunion for the Fran Drescher-led sitcom – which first aired in November 1993 – was a treat and featured the entire original cast as they participated in a staged table read of the iconic series’ pilot episode.

The slate of 2020 reunions also included casts from the likes of "Melrose Place," "High School Musical," "Princess Bride," "The Thing You Do!," "Frasier," "Hocus Pocus," "Desperate Housewives," "Back to the Future," "The Goonies," "This Is Spinal Tap," "Hamilton," "Scandal," "The West Wing," "Parks and Recreation," "The Lord of the Rings," "Scott Pilgrim vs. The World," "Ferris Beuller's Day Off" and "X-Men."

‘Nana Patekar is indecent but I don’t think he can do such thing’, says MNS Chief Raj Thackeray about Tanushree Dutta allegations