Samuel Eto’o, former Cameroon soccer star and current national team president, was involved in a violent altercation outside the World Cup stadium Monday night, where he appeared to kick a man in the face, sending him to the pavement.

The incident was captured on video by a witness … and appears to show Eto’o, a former Barcelona star, walking away from Stadium 974 in Doha, Qatar, surrounded by fans who are attempting to take selfies. Everything was going smoothly — and then it wasn’t.

For a reason that isn’t yet clear, one of the guys clearly pissed Eto’o off, prompting the soccer exec to start chasing the guy, while SE’s people try and hold him back.

Despite a few trying to keep the peace, Eto’o gets loose and appears to deliver a kick to the man’s face, sending him crashing to the pavement.

On Tuesday, Samuel apologized on social media for “losing my temper” … but blamed the fan for antagonizing him. 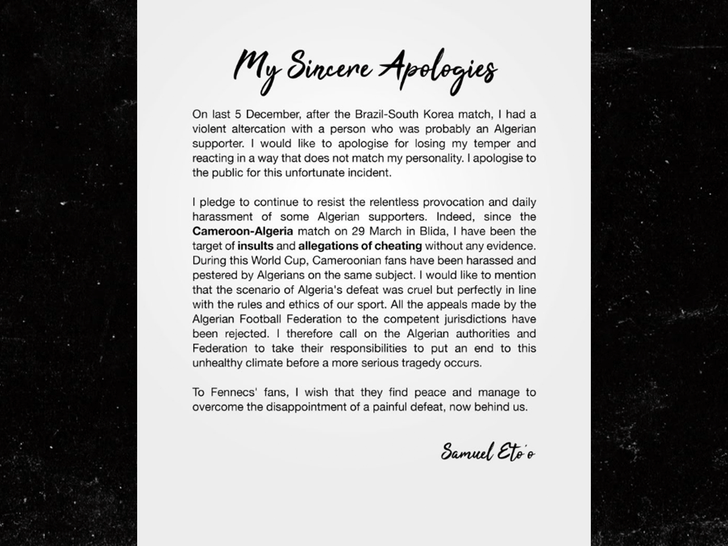 Eto’o’s Cameroon squad was eliminated from the WC last week during the group stage … but he stuck around, and had just gotten done watching Brazil beat South Korea, 4-1, when the fight occurred.

Samuel Eto’o was elected to lead Cameroon’s soccer team last year. Eto’o, himself, played in four World Cups … with the last being in Brazil in 2014.

Alex Zane confirms his whirlwind marriage is over

‘All American’ Star: I Relate ‘A Lot’ To Jordan Baker — He’s Living In ‘Two Different Worlds’