When her sister got married, the wedding was held in splendour at Chester Cathedral with guests including the Queen, Prince Philip and Prince William.

But Lady Viola Grosvenor, who was named as one of Britain’s three most eligible young women, has got married in secret, I can disclose.

Not only did the Duke of Westminster’s sister, 29, manage to keep the British wedding ceremony unknown to anyone outside her tight circle of family and friends, but she also had a big second celebration in Africa.

Lady Viola Grosvenor, who was named as one of Britain’s three most eligible young women, has got married in secret, I can disclose

Her husband is dashing Dragoon Guards officer Angus Roberts, 30, whose parents, Andy and Caragh, run a hotel resort on the private island of Manda Bay in Kenya.

‘It was all very hush-hush,’ a source tells me. ‘Viola didn’t want any publicity at all.’

Lady Viola’s family fortune is estimated at £10.1 billion, with Grosvenor Estates owning 300 acres of Mayfair and Belgravia, the 11,500 acre Eaton Estate just outside Chester, the Halkyn Estate in Wales, as well as land in more than 60 cities around the world.

The couple’s African celebration was held at the Roberts’ hotel on the exclusive – and highly fashionable – white sand island in the Lamu archipelago on Kenya’s coast.

It’s described as the ultimate ‘no shoes, no news’ experience, perhaps explaining the media blackout of the happy event. 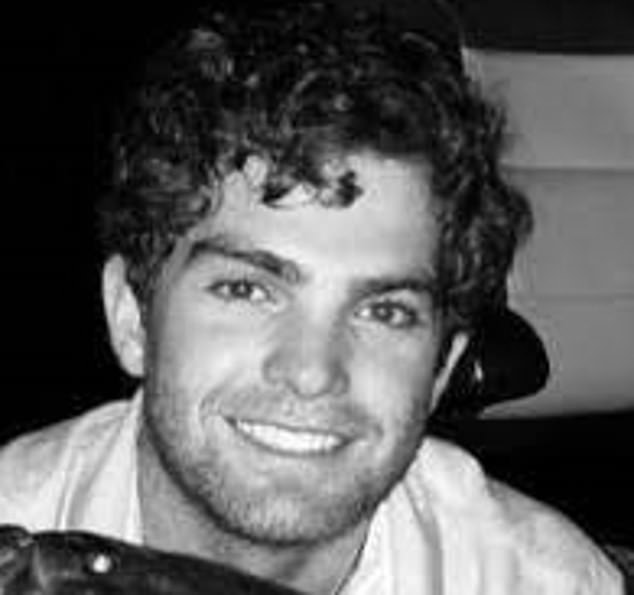 Not only did the Duke of Westminster’s sister, 29, manage to keep the British wedding ceremony unknown to anyone outside her tight circle of family and friends, but she also had a big second celebration in Africa 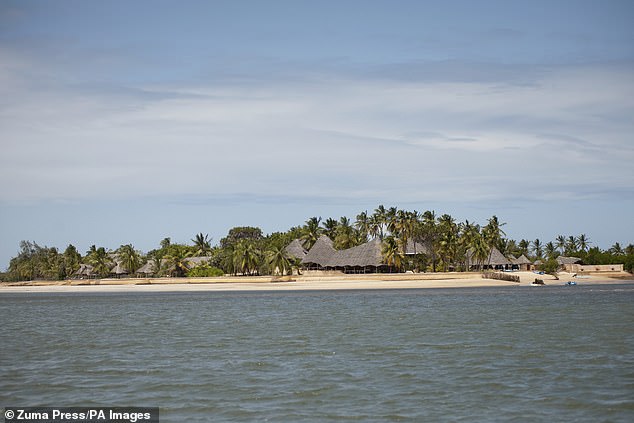 Her husband is dashing Dragoon Guards officer Angus Roberts, 30, whose parents, Andy and Caragh, run a hotel resort on the private island of Manda Bay in Kenya 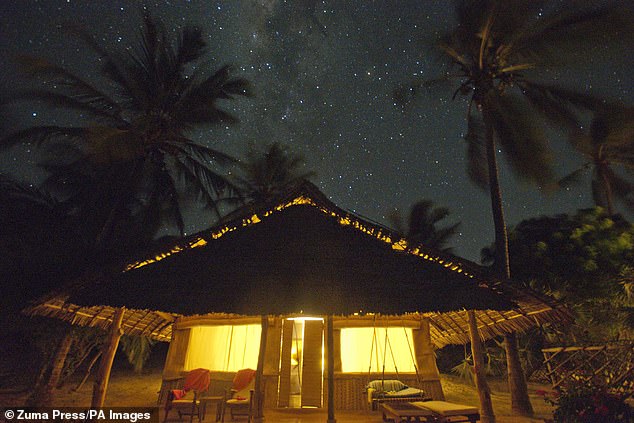 The Roberts family introduced flying safaris to Kenya and have entertained many dignitaries including Prince Philip.

Before joining the Army, Angus worked for a renewable energy company after graduating in Mechanical Engineering from the University of Edinburgh. He also worked as a host at his parents’ hotel, entertaining guests on safaris, fishing expeditions and kitesurfing adventures.

Lady Viola, who’s described as ‘extremely passionate’ and ‘big-hearted’, runs her own children’s art therapy business, Magic Canvas, which aims to ‘help kids understand their past with artistic practices.

The 2004 wedding of her sister Lady Tamara to royal pal Ed van Cutsem was of historical significance because it’s said to have led to Prince Charles finally announcing his engagement to Camilla Parker Bowles.

Camilla was reportedly so infuriated to discover that royal protocol dictated she wouldn’t be permitted to sit with her boyfriend Charles and would have to arrive separately, that she told him the status quo was no longer acceptable. Three months later, Buckingham Palace announced their wedding date.

A family spokesman declines to comment. However, a close friend confirms: ‘Viola is married and her surname is now Roberts.’

Prince Harry and Meghan, who preach about the environment while taking private jets, are not the only ones who could be guilty of eco hypocrisy.

I hear the Queen’s bank, Coutts, has been accused of ‘greenwashing’ by a major environmental auditor.

When it secured a coveted ‘B Corp’ status, denoting it as an ethical company, Coutts declared this meant it was ‘treading lightly on the planet’ and its HQ was swiftly covered in pictures of bees and plants. However, in its application to be a B Corp, seen by this column, it admits the environment ‘isn’t a high priority in decision making’, and that it invests none of its vast wealth in schemes which tackle green issues.

Marc Laine, founder of Environmental & Social Impact Monitor, is not impressed. ‘It seems all too common to see an organisation that includes mediocre environmental components focus their communications on having a high rating as evidence of being a leader on environmental performance, when in fact they are not.’

Princess Di’s wedding dress designers David and Elizabeth Emanuel could barely stand to be in the same room following their split in the 1990s.

I can disclose that the pair are, however, healing their rift, thanks to the birth of their first grandchild, pictured with David.

‘The one thing we could agree on is that we’re so excited and delighted to have a grandchild,’ Elizabeth tells me.

Their lawyer daughter, Eloise, has named her son Atticus. Elizabeth, who is launching a kids’ clothing range, adds: ‘Atticus is going to have to wait a little bit before he gets any clothes.’ 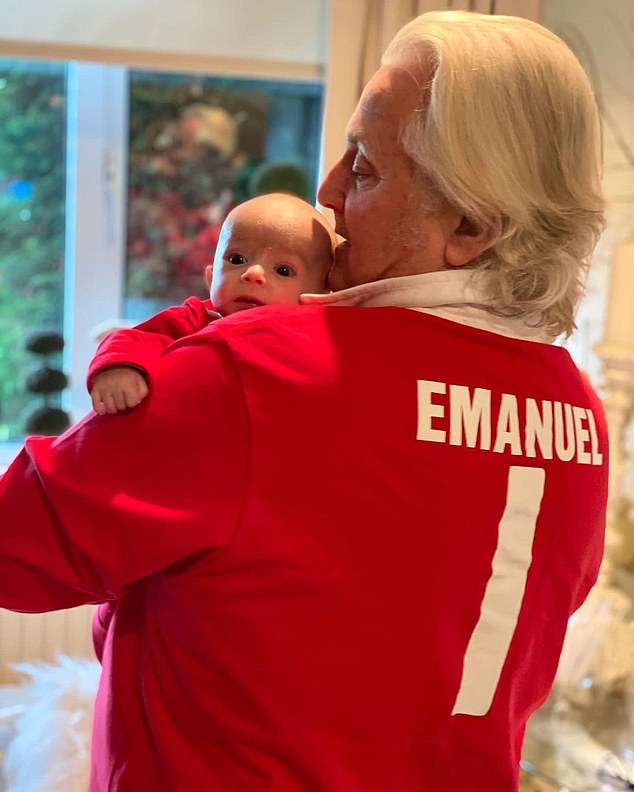 I can disclose that the pair are, however, healing their rift, thanks to the birth of their first grandchild, pictured with David

How gossip Gavin got his gong?

The big question in Westminster is: how on earth did Gavin Williamson manage to secure a knighthood, despite having been sacked from the Government not once but twice?

Well, I think I may have found the answer: his love of the most scurrilous gossip.

Williamson — nicknamed Private Pike by critics who compared him to the inadequate young soldier in Dad’s Army — was once the parliamentary private secretary for former prime minister David Cameron. And Cameron is gushing about the South Staffordshire MP, 45. ‘He was likeable, fun and different, with the face of a 23-year-old researcher and the mind of a wizened whip,’ he relates in his memoirs.

‘He would try to lighten my mood with stories or quotes about what MPs had been getting up to. “Which Tory minister has had carnal relations with a Labour MP?”, he once asked me as he wandered into my office.’ Sadly, Cameron does not reveal the answer.

Celebrity Gogglebox star Woody Cook confirmed his romance with Game Of Thrones actress Nell Williams in the most public way before Christmas by kissing her on the red carpet at an awards ceremony.

‘I’ve had no luck on dating apps,’ Woody wails at the EE Rising Star Party at 180 House in London. ‘At a party, I’ve got all the charm and chat [but] on apps, I’m useless.’ Woody is bisexual and, I hear, pop star Sam Smith, 29, has been sending him messages on social media. 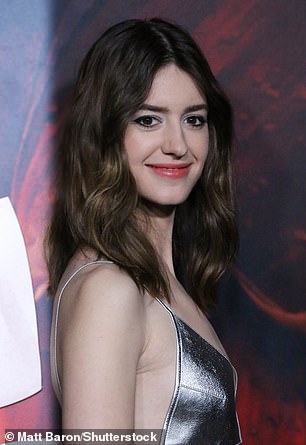 Daisy Edgar-Jones was literally walking on eggshells at the premiere of her latest film.

The strappy white heels by luxury Spanish designer Loewe were made to look as if the heel was piercing through an eggshell and causing the yolk to spill out.

Privately educated Daisy has made public her love affair with shoes.

She became the face of a Jimmy Choo collection for her first major fashion campaign.

The TV executive’s daughter has also previously credited her cousin Jacqueline, a shoe designer, with encouraging her passion for fashion. 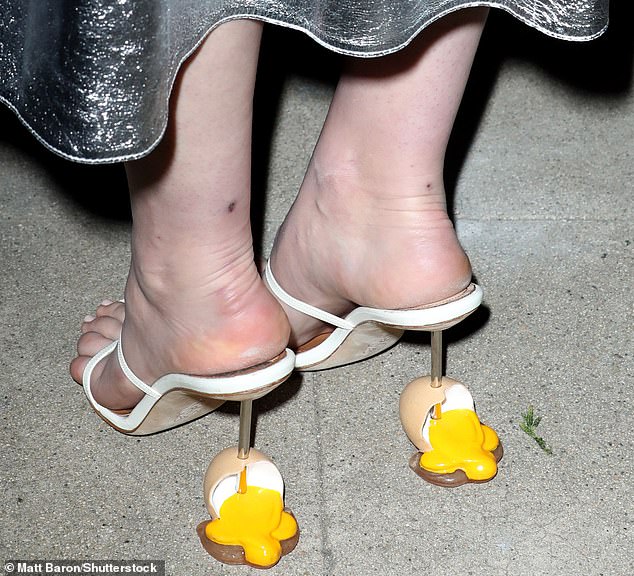 Lord Heseltine’s grandchildren Mungo and Isabella were delighted when their parents gave them the go-ahead for a gap-year adventure before they go to university.

The 19-year-old twins may have been less thrilled when their mother, Annabel, 58, announced that she’d decided to join them. They are currently in Belize, Central America, working on a conservation project. 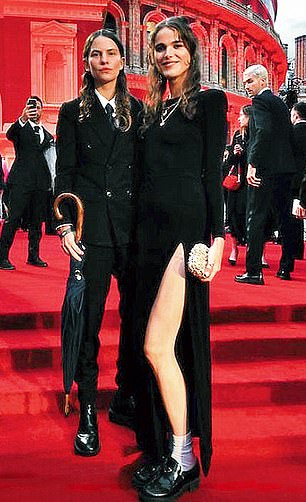 Society model Frankie Herbert and musician Eliot Sumner are celebrating their romance by launching a new project together.

Frankie, 24, who’s the daughter of royal confidant Harry Herbert, and rock star Sting’s child Eliot, 31, are encouraging members of the public to share love letters they wrote but decided not to send online, as part of a ‘cathartic, healing’ process.

The pair have never officially confirmed they’re a couple, but TV chef Clodagh McKenna, who is married to Frankie’s father, tells me of the project: ‘Frankie and her partner Eliot are doing it. It’s a fantastic idea.’

Tony Blair was so impressed by the legal skills of his former flatmate Charlie Falconer that he made him Lord Chancellor.

Now, Lord Falconer may need to use his mastery of a brief to help his son. I hear that former Army officer William ‘Rocco’ Falconer faces legal action in Ghana over claims that he and others owe another businessman millions.

The Cambridge graduate set up social enterprise businesses in West Africa, securing funds from donors such as the Prince’s Trust.

But one of these projects, Demeter Ghana, has been sent a summons from Ghana’s high court after a dispute with a business it worked with, financing and supplying seed and fertiliser.

The business, Sustainable Trading, claims Rocco and others owe around £8.7 million. Rocco strenuously denies ‘each and every allegation’ and Demeter Ghana has launched its own counterclaim for £2.5 million, alleging that it is, in fact, Sustainable Trading which owes money to them.

‘Any suggestion of wrongdoing on our part is simply untrue,’ Rocco tells me.

‘We have honoured all of our financial commitments and have, unfortunately, found ourselves on the wrong side of a commercial dispute.

‘We are confident that justice will prevail.’

Statue of Unity: Salient features of the world's 'tallest statue'