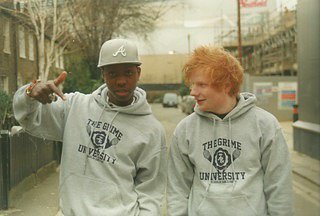 Ed Sheeran has paid tribute to Jamal Edwards, describing the late SBTV founder as a ‘brother’ and saying he would ‘not be here without him’.

Edwards, who launched many careers with SBTV, including Ed’s, died this week at the age of 31 following a sudden illness.

Sharing an old photo of the pair of them, Ed, 31, wrote: ‘I haven’t posted anything coz I can’t find the words, I can’t reply coz I don’t know what to say.

‘Jamal is my brother. His light shone so bright. He only used it to illuminate others and never asked for anything in return.

‘A stars light shines for millions of years after they go, and his will continue to light up every dark moment, we are all witnessing his power. I would not be here without him, professionally and personally.

‘There will never be anything close to what he is, but I’m so grateful to have existed within his orbit. My brother, come on.’

It’s reported that Ed and his wife Cherry also attended a vigil for the late star this week, held in Acton, London.

A source told The Sun: ‘Ed and Cherry went to pay their respects on Tuesday night.

‘He kept a low profile and no one bothered him. After all Jamal did at the start of his career it was important for him to be there.

‘They stayed at the vigil for about 15 minutes before heading to see Brenda.

To view this video please enable JavaScript, and consider upgrading to a webbrowser thatsupports HTML5video

‘He’s told Brenda he will support her in whatever she needs.’

Loose Women star Brenda announced her son’s death in a statement earlier this week, saying: ‘It is with the deepest heartache that I confirm that my beautiful son Jamal Edwards passed away yesterday morning after a sudden illness.

‘Myself, his sister Tanisha and the rest of his family and friends are completely devastated. He was the centre of our world.

‘Jamal was an inspiration to myself and so many. Our love for him lives on, his legacy lives on. Long live Jamal Edwards MBE, MBA, PHD.’

Stars across the UK paid tribute, with Idris Elba posting a black square on Instagram and writing: ‘We lost one @jamaledwards You will be missed little brother,’ while Gabrielle said it was ‘so heartbreaking to hear of Jamal Edwards passing, he was such an incredible young man, who was loved and will be missed by so many.

‘Meeting him and doing my A64 was an honour, he was just so lovely. My heart goes out to his amazing Mum, his family and all who knew him.’

Meanwhile, Chelsea fans remembered Edwards in a poignant moment at Stamford Bridge, pausing the team’s game against Lille for a round of applause in the 31st minute.

Howard Stern calls Les Moonves a ‘shark’ with ‘no humanity’

Madonna is canceling concerts due to undisclosed injuries

Explained Ideas: What India can learn from Brazil to avoid Covid turning into a financial crisis

Bigg Boss 14, Day 10 synopsis: Nikki Tamboli turns Sanchalak for the farmland task as contestants are pitted in 2 teams against each other