The last episode of Dilli Darlings began with, Shaloo deciding to have the Kitty Party at her house. She takes the guests to the basement where she greets them with flowers. Shaloo begins her kitty party activities and asks all the ladies to share their own stories of hardships. Reena shares about her 11 pregnancies and multiple miscarriages. Bhavna talks about supporting her family before getting married. Seema too shares her problems with her husband’s gambling. Later Reena is picked as the host of the next Kitty Party. Shaloo also asks for help in organizing her househelp, Santosh’s, wedding.

In tonight’s episode, Shaloo holds the haldi ceremony for Santosh and his wife at her own house. However, she is worried once he is married he will take a holiday. Santosh promises to not take a holiday. When the guests and the bride comes, Shaloo asks her husband to once again remind Santosh to not go on a holiday after getting married.

Pooja shows up to help Shaloo throughout the wedding and takes part in the sangeet dance as well. Meanwhile, Guneet realizes that her event is next week and she doesn’t have the models she wanted. She picks up two local models she liked. They are both fans of hers and want to be a part of her make-up seminar.

Guneet reaches the hall with her child. The entire audience stands up to greet her. Guneet gives them live make-up tutorials. Later Guneet brings Bhavna on stage who gives the audience fashion tips. Guneet’s family show up to congratulate her on having such an event. 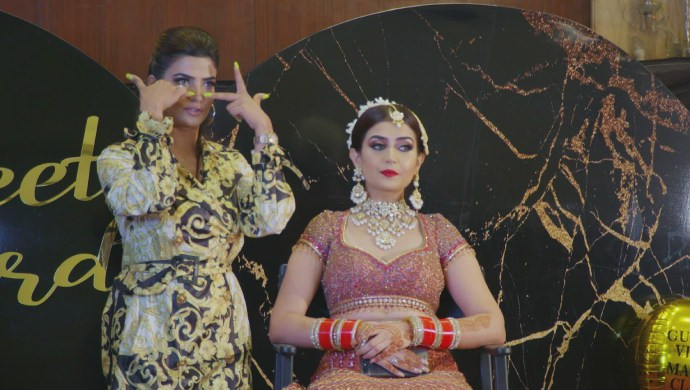 Shaloo and the bride reach the wedding hall on time. Four hours later, Santosh is not yet at the venue. Shaloo gets worried that he will not show up. When Santosh reaches, four hours late, he claims there was traffic. Shaloo scolds him saying they both came from the same road. Santosh asks Shaloo to not scold him on his wedding day at least.

Later, Pooja, Deepshika, and Manya show up for the wedding carrying gifts. Shaloo asks Santosh to put the gifts aside, but Santosh says he won’t work on his wedding day. Santosh and his bride go to the mandap where Shaloo does the bride’s Kanyadaan. Will Santosh take a holiday after his wedding still? Stay tuned to find out.

Vote on the Chicest Looks of the Week

‘This time I have decided to speak in better Hindi’

Money Heist director remembers three most important scenes: ‘One of those filming days that you never forget’

From vaccines to illegal fishing, Quad will announce a range of deliverables: US official