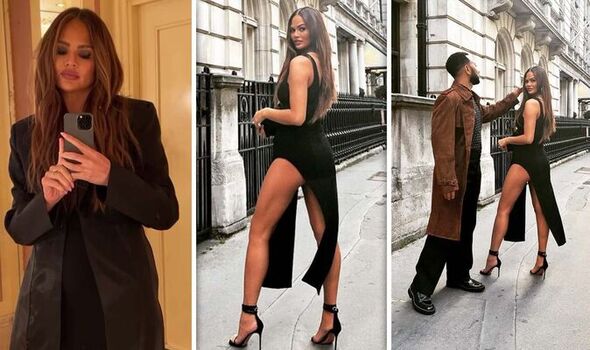 She put her toned legs on display

Chrissy Teigen, 36, showcased her long, sculpted legs in a show-stopping gown as she headed out last night.

The US model was joined by her husband and singer John Legend during their outing in London.

She took to Instagram to share with her 37.9 million followers a series of pictures and a video of her all-black outfit.

She struck a sultry pose, as two of the snaps showed her long legs as she flashed the flesh in a tight-fitted black dress that featured a thigh-split at either side.

Chrissy – who could be seen posing as John ran his fingers through her hair in one of the pictures – opted for black heeled sandals and straight hair to finish off the polished look.

She also took a mirror selfie and a video in the bathroom at The Ivy restaurant while still wearing her black coat.

Chrissy captioned the post: “Good mushy peas and bathroom light at the ivy.”

Chrissy Teigen stepped out in London

She struck a sultry pose showcasing her black dress

Chrissy Teigen was joined by her husband and singer John Legend

Chrissy enjoyed a night out in London

Chrissy took a mirror selfie and a video

She gave the camera a fierce look

She donned an all-black outfit

Chrissy Teigen is a model and television personality

DRAM And H.E.R. Team Up On New Track ‘The Lay Down’

India vs Pakistan: What is DLS par score if play is called off?