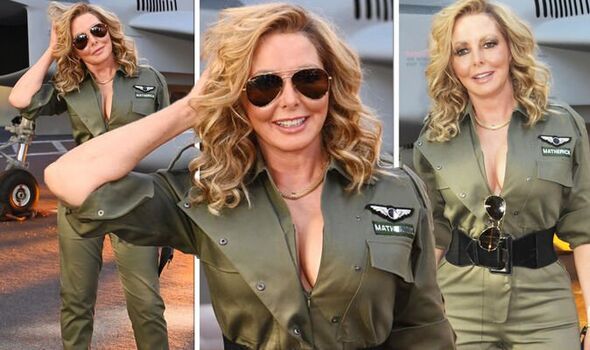 The Countdown legend looked chic in a jumpsuit.

Top Gun: Maverick is a follow up to the hit 1980s film, with Tom reprising his role as Pete “Maverick” Mitchell.

Yesterday, the film premiered at Cannes Film Festival, where Tom and his co-star Jennifer Connelly, who plays Penny Benjamin, walked the red carpet.

Countdown star Carol Vorderman has already teased the pilot outfit she plans to wear on to the glitzy bash, as she has a well-known love for aviation.

In view of her 220,000 followers, the mother-of-two told her fans how much the evening meant to her.

Carol wrote: “Trying my flying suit on a few days ago in London….I need a haircut!!!

“Strictly speaking it should be a gown on the red carpet tonight but this is my little homage to the original Top Gun and to my passion for aviation. #pilot”.

In the series of snaps, Carol could be seen dressed up in a brown fighter pilot outfit, complete with a pair of aviator sunglasses.

The original Top Gun film has grossed more than £289.5 million worldwide, with Tom famously performing his own stunts on set.

Also working as a producer on the movie, Tom insisted the cast were trained as fighter pilots – but his co-star Glen Powell admitted this was tough.

“There was a lot of puke during filming,” he told The Sun on Sunday.

“Before shooting, Tom sent us on three months of training to get used to the G-force. [But] even with training, nothing prepares you for the intensity of flying in an F-18.

“We were all flying once a day and Tom was up there three times every day. But it didn’t faze him at all.

“There we are, all being sick into bags, and he is taking everything in his stride. The guy is a machine.”

It was also reported Tom banned the cast from drinking alcohol, ensuring they were in top condition both mentally and physically while working.

Covid-91: We need to restore the idea of village swaraj

‘No more a criminal,’ LGBT community erupts with cheer over Section 377 verdict