Boy George, 59, is best known as a singer and the frontman for Culture Club. The star has been weighing in on the Meghan Markle and Prince Harry interview with Oprah Winfrey this morning. He criticised the tone of the interview, which aired overnight in the US, arguing the host didn’t push hard enough.

Posting to his 482,000 followers, George opened up about his thoughts on the landmark interview.

One of his criticisms of the interview was how Oprah did not ask enough about Meghan’s own family.

He wrote: “Not a single question about Meghan’s family?

“Is there a part two or is there only financial mileage in dissing our Royal Family?” 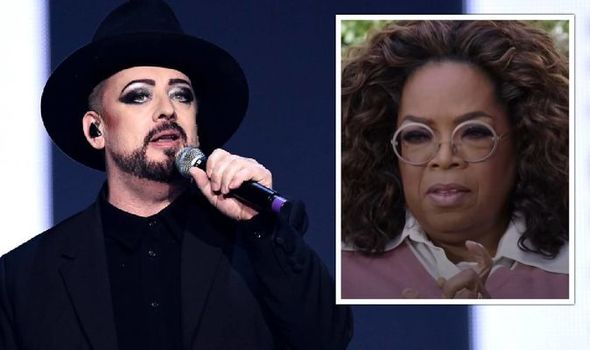 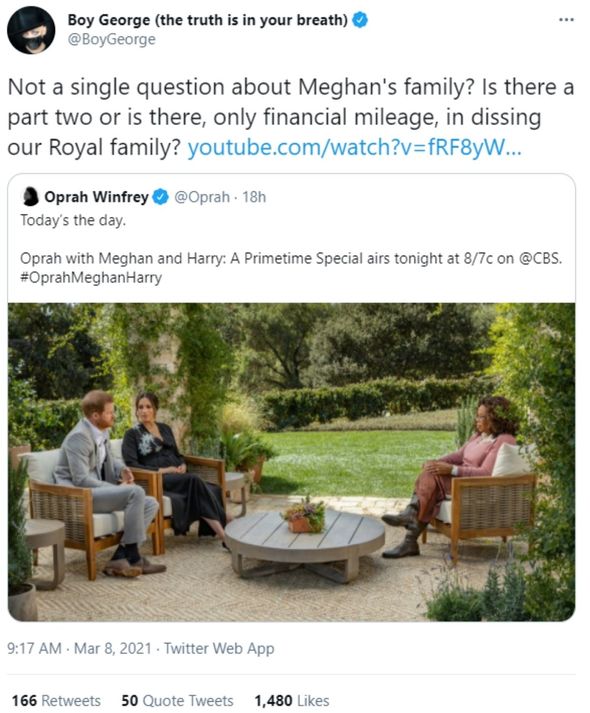 The star wrote this in response to Oprah’s tweet publicising the interview.

Posting on social media, George also shared several other thoughts on the interview, during which Meghan and Prince Harry opened up about their treatment in the Royal Family.

Another point of contention for the star was Meghan’s comments on someone asking “how dark” Archie’s skin colour would be.

Meghan said: “There [were] conversations with Harry about how dark your baby is going to be and what that would mean or look like.” 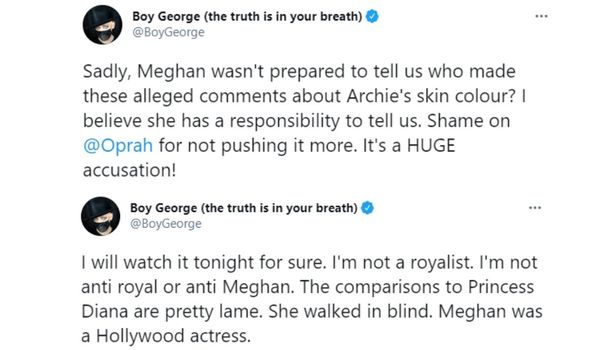 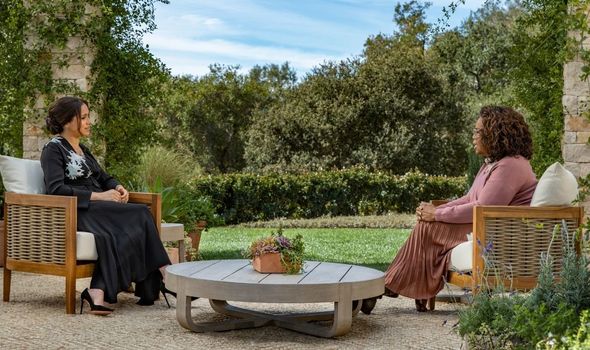 In response, Oprah said: “They were concerned that if he were too brown that that would be a problem?”

Meghan replied: “I wasn’t able to follow up. If that’s the assumption you’re making… that would be a safe one.”

George criticises the interviewer for not pushing on who exactly made these statements.

He wrote: “Sadly, Meghan wasn’t prepared to tell us who made these alleged comments about Archie’s skin colour?”

“I believe she has a responsibility to tell us. Shame on @Oprah for not pushing it more. It’s a HUGE accusation!”

However, some people pointed out it was Prince Harry who this was said to.

One wrote: “Why do you think she has that responsibility?”

Another continued: “Why would that be HER responsibility when Harry said it was said to HIM?

“Maybe she was respecting Harry’s right to relay who said it?”

George also revealed he will wait to watch the interview in full when it airs on ITV tonight.

He added: “I will watch it tonight for sure. I’m not a royalist.

“I’m not anti royal or anti Meghan. The comparisons to Princess Diana are pretty lame.

“She walked in blind. Meghan was a Hollywood actress.”

The landmark interview will be shown in full on ITV tonight, with the broadcaster scrapping their usual schedule to air it.

Oprah With Meghan and Harry is on ITV at 9pm on Monday March 8. You can watch the full interview afterwards on the ITV hub.