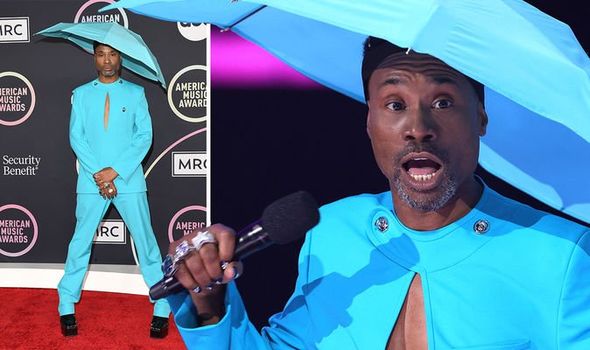 There’s no doubt about it, the stars definitely brought the style to the American Music Awards 2021 this year. But as they stepped out on Sunday night’s red carpet, one celebrity’s attire took fans by surprise – and in some cases, it wasn’t a good one.

I can’t get over that Billy Porter look, it’s literally the worst

It featured a cut-out chest area and he matched it with black leather platform boots and a stunning extra-large ring.

But there was something a little more noticeable about his eye-catching ensemble that fans couldn’t miss.

And it didn’t go down too well with some of them.

The Pose star continued his reign of over-the-top red carpet hats with his latest look.

Fans of the 52-year-old actor know he’s anything but subtle, and Billy completed the ensemble with a headband that featured a large umbrella on it.

But the larger-than-life topper wasn’t that much of a hit with fans, who shared their views on Twitter at his latest trend.

SFO_Crew wrote: “That hat is from the dollar store. Trashy”

TheSlayGawd moaned: “I can’t get over that billy porter look, it’s literally the worst.”

Edgarblackmon sighed: “For the first time in my life, I didn’t like Billy Porter’s outfit. He’s still my guy tho.”(sic)

While Gemstone_LXXXII praised him: “Okay Billy Porter I see you in blue! Blue heartBlue heart Damn he always kills it.”

Someone else reasoned: “He’s Billy Porter. That’s what he does. Head pieces matter.”

Elsewhere, Supermodel Winniw Harlow, looked radiant as she graced the red carpet in a dress that left very little to the imagination.

Stepping out in a jewelled super-sheered minidress, the 27-year-old was one of many who presented an award at the prestigious show.

But it wasn’t her presenting skills that got people hot under the collar.

The embellish Zuhair Murad number, sported tassels draped over her sleeves and lower half.

The runway model walked with absolute confidence, despite the shining tassels barely covering her up.

The blues, greens and golds incorporated into the stunning outfit dazzled viewers under the lights, drawing more attention to the sensational beauty of the 27-year-old star.

She paired the eye-catching ensemble with a pair of diamonte strappy gold heels.

‘The Nun’ & The Baroness From ‘Princess Diaries’ Are The Same Person, If You Haven’t Realized

Jailed for sedition after Pulwama, PM scholarship student struggles to put his life back together