Like it or not but Nikki Tamboli is surely making her mark in the Bigg Boss 14 house. In the first week itself, she has impressed all the seniors, Sidharth Shukla, Hina Khan and Gauahar Khan. Not just that but she has also become the first confirmed Bigg Boss 14 contestant who will now share space with seniors in decision making. However, Nikki has been accused of copying Bigg Boss 13 contestant Shehnaaz Gill by her fans since day 1.

Nikki was also trolled for getting close to Sidharth since Shehnaaz’s fans have always considered SidNaaz’s bond as a special one. A new trend called ‘SidBoli’ had also started making waves on Twitter which certainly didn’t go down well with Shehnaaz’s fans. They even slammed Sidharth for not being loyal to Shehnaaz and flirting with Nikki. However, Shehnaaz recently asked her fans to stop judging Nikki and Sidharth. “Don’t judge anyone wrong samain sabko toh nhi bol sakhti but i trust #shehnaazians if u respect me don’t judge anyone Jo bhi koi galat bole kisi ke baare main turn nhi bologe Ei bub ju hai na ??? (sic),” Shehnaaz commented on her Instagram post.

However, people took offence of Shehnaaz’s comment and began trolling her for siding with Sidharth. After receiving a lot of hate comments, an upset Shehnaaz turned off her comments section apparently to not let the negativity of people affect her. Her fans soon realised their mistake and started sending her multiple requests to turn back her comment section on.

Looking at the love and affection of her fans, Shehnaaz then gave in to their requests and turned on the comments section once again. Fans were delighted to see Shehnaaz connecting back again with them. They apologised her for trolling her and promised to never repeat their mistakes again. 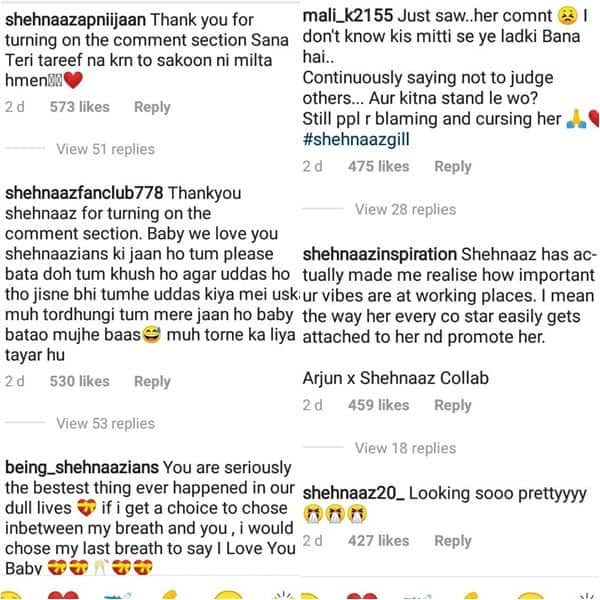 Meanwhile, Nikki Tamboli seems to be getting on Bigg Boss 14 housemates nerves as she would try imposing her rules in the house. Eijaz had said that Nikki is not someone who should be given the power to control them. It remains to be seen if Nikki will become overconfident and use her powers to humiliate others or turn out to be a good leader in the house.