Last week on Bigg Boss 14, Rubina Dilaik was seen getting in an intense fight with Rahul Vaidya, which escalated to a level in which husband Abhinav Shukla also joined the showdown and attacked Rahul. The fight began over task-related issues, and soon the two dragged each other’s personal lives into the spat.

At one point, Rahul told Abhinav, “Ye biwi ka nahi ho saka, kisi aur ka kya hoga bhai (he couldn’t be loyal to his wife, how would he be loyal to anyone else).” That was the moment when Rubina lost her cool and responded, “Tu kaun hai certificate dene wala, tere mein to himmat nahi hai ki apni partner ko is show me lekar aaye (who are you to issue a certificate, you do not have the guts to bring your partner in the show).”

When Rahul tried walking away from the fight, an angry Rubina was seen pulling his clothes to make him face her. When Abhinav came out to support Rubina, Aly Goni rallied forces behind Rahul.

In this nasty fight, we felt that Rahul crossed the line by questioning Rubina and Abhinav’s relationship. We had conducted a poll to determine if the audience too felt the same way as we did.

The poll result is finally out and it seems like the audience was pretty much divided over the entire incident. While 51% of the audience felt that Rahul did not cross the line, 49% of them felt Rahul’s actions were questionable. 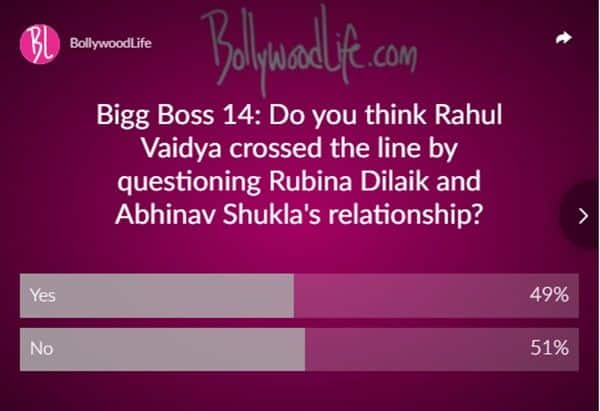 Keep watching this space for the latest updates on Bigg Boss 14.