Ashley Olsen is just a woman trying to go on a hike with her drink and trusty machete. We all have our hobbies, after all. Ashley’s BF Louis Eisner captured and shared some photos of his girlfriend in what looks to be her natural element. Now, this photo isn’t rare because of Ashley’s weapon—it’s rare because we basically never see her (aside from the random paparazzi pic).

It looks like she’s out here thriving. Want some clarity about the whole machete thing? Well, we don’t have any LOL. We can see that she’s wearing a white sweatshirt, linen pants, a button-up shirt tied around her waist, and a pair of black Yeezy sneakers. She’s also rocking a matching baseball cap and oversized sunglasses. There’s a lot going on with this lewk and the machete kinda completes it, tbh. 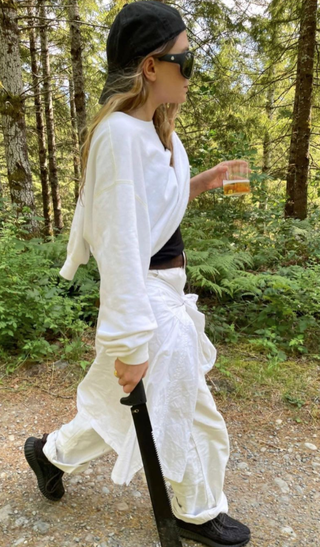 Ashley and sister Mary-Kate Olsen are v private, especially for people who grew up as child icons. The sisters recently gave an interview to i-D magazine, where they explained their lifestyle and how it inspires their fashion label, The Row.

“We were raised to be discreet people,” Mary-Kate explained in the interview. “I think that potentially that’s just our aesthetic, our design preference,” Ashley added about The Row’s modest style. “But that doesn’t mean that we don’t also appreciate something truly ornate or maximal. Sometimes a collection even starts quite like that, and then gets pared down. It doesn’t always start from that simplistic place.”

Yes, yes. Modest. Private. Discreet. Except for when hiking throughout the woods. When hiking, a machete is of the utmost importance. I don’t make the rules, people. That’s just how it works.

Pete Davidson says ‘I really don’t want to be on this earth’ in cryptic post, deletes Instagram

Coronavirus: Theatres in Kerala to be shut down until March 31, film releases postponed

‘The Young And The Restless’ Recap For Wednesday: Abbott Family Relives Painful History