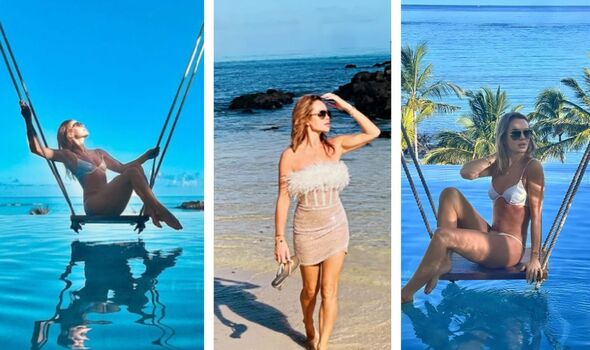 Amanda Holden looked uncompromisingly glamorous as she strolled by the ocean at the five-star Lux Grand Baie hotel, which is set on what the resort describes as “the island’s most coveted beach”.

Although some party-goers endured freezing cold temperatures and downpours of rain as they walked through British streets, Amanda Holden had no such worries.

The Heart FM presenter, 51, was instead seen strolling down a sun-soaked beach on the island of Mauritius this festive season.

There was no chance of her dressing down as she celebrated the start of 2023 in a feather trimmed strapless dress for the ultimate photocall.

“The morning after the night before,” she captioned her photo, adding excitedly: “Can’t wait to see what 2023 brings!”

Meanwhile, she and her two daughters looked the picture of contentment in a photo she shared from the previous night, where the trio sat around the table at a five-star island resort.

Amanda Holden has entered her sixth decade of life, but while she may have gained wisdom over the years, she scarcely seems to have aged physically at all, as this celebratory New Year’s Eve snap of herself with 16-year-old Lexi and ten-year-old Holly proves.

Amanda Holden and her husband Chris Hughes splashed out on a stay at the Grand Baie, which typically costs in excess of £500 per night,  to see in the New Year in luxurious seclusion

Amanda Holden’s novelty sunglasses spelt out “2023”, while the huge feather boa-style trim on her dress showed she was shimmying into the new year in style.

Fortunately, Amanda Holden’s family are supportive of her sexy styles

Although Amanda Holden doesn’t shy away from coveting attention, her family, including daughters Lexi and Holly, are hugely supportive of her “daring” attitude to style. Last year’s outfits included a neon pink Barbie style PVC dress and a pink sequin jumpsuit with skyscraper peeptoe heels (pictured).