Those oversized, over-the-top spectacles… that gold lame bomber jacket… the gold-winged platform boots. It can only be Elton John.

But wait, and take a closer look.

Behind the glasses and the teased tufts of hair is not the flamboyant rock’n’roll icon but Taron Egerton, 28, who portrays him in Rocketman.

The film is shooting now with Bodyguard and Game Of Thrones star Richard Madden playing John Reid, the singer’s former lover and manager; Jamie Bell as Bernie Taupin, who wrote a catalogue of hits with John; and Bryce Dallas Howard and Steven Mackintosh as his parents.

Scroll down for video 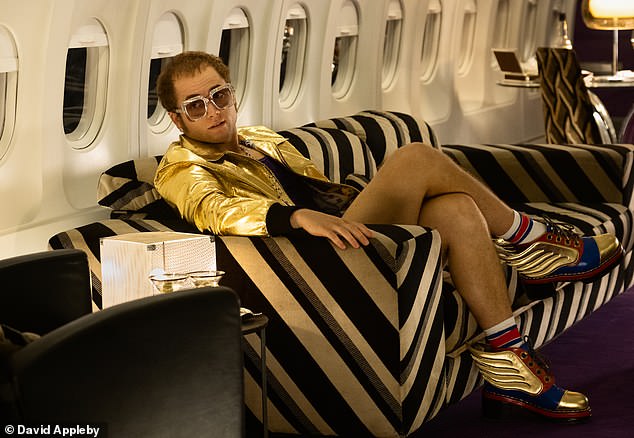 Taron Egerton is portraying Elton John in the upcoming film which chronicles his years as a prodigy at the Royal Academy of Music through to his musical partnership with Bernie Taupin. The exclusive image here is from a fantasy sequence which sees John being launched like a rocket (as the soundtrack blasts out Rocket Man) from the stage of a concert he gave at Dodger Stadium in Los Angeles in 1975 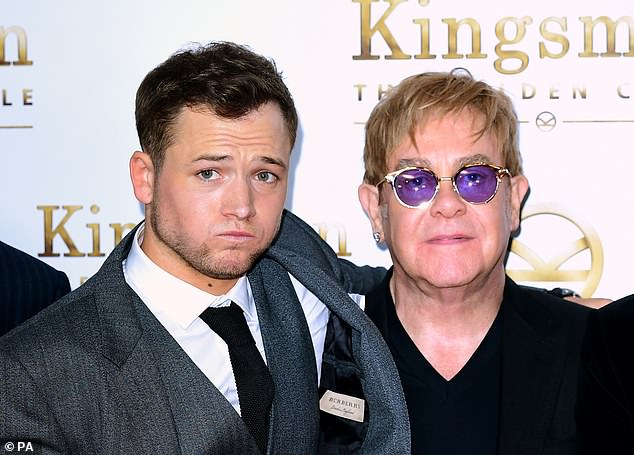 Taron Egerton (left) and Elton John (right) starred together in Kingsman: The Golden Circle which was released last year. A third Kingsman film is due out in 2019

‘Elton just said, “Tell it all. Go as R-rated as you need to”. And we do just that, with his blessing. The flaws and the genius are all there.’

Director Dexter Fletcher, in a break from shooting in London yesterday, told me: ‘It’s about Elton navigating personal and family relationships. He looks for love in all the wrong places, he abuses himself with drugs and booze – yet he’s a genius who has survived for over half a century in showbusiness.’ 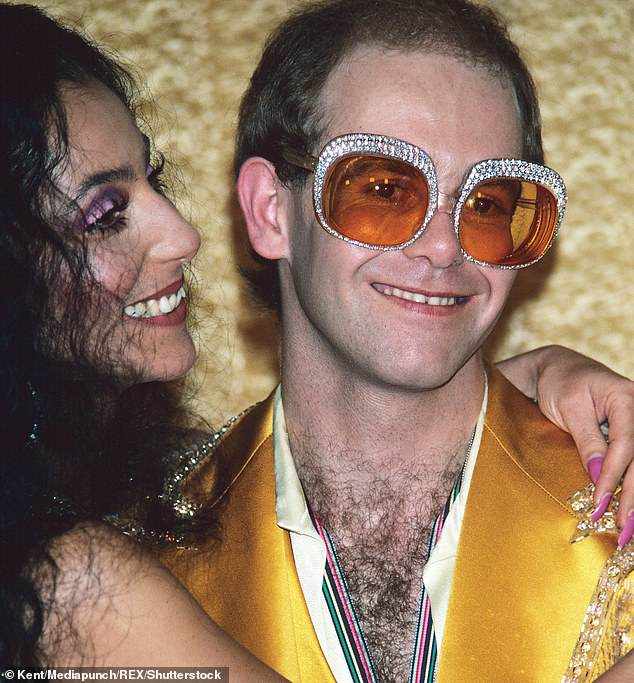 Although the movie, written by Lee Hall, is based on fact, some of John’s story has been fictionalised. For instance, the exclusive image here is from a fantasy sequence which sees John being launched like a rocket (as the soundtrack blasts out Rocket Man) from the stage of a concert he gave at Dodger Stadium in Los Angeles in 1975. He then lands aboard a private jet, and cavorts with friends.

Welsh-born Egerton does his own singing. ‘Taron nailed the singing and speaking, hands down,’ Fletcher said.

Rocketman is due in cinemas late next spring.

Coronavirus pandemic: Kanika Kapoor deletes Instagram post in which she had revealed about testing positive for Covid-19 | Bollywood Life

Endgame a satisfying watch, leaves fans in Chandigarh in tears